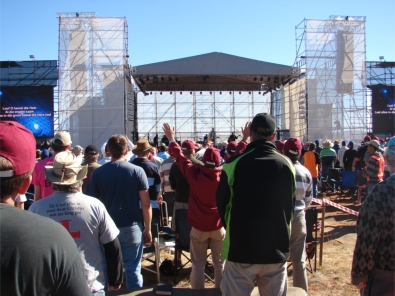 The inaugural Karoo Mighty Men Conference ended yesterday but there is no doubt that the impact will be felt in families and communities throughout South Africa as inspired men return to their regular lives.

Mighty Man founder Angus Buchan, 63, was the main speaker at the event and thousands of men were visibly stirred by his no-nonsense call on them to open their hearts to the transforming love of Jesus, to lay their own agendas aside for His, and to put their faith in Him no matter what circumstances they faced in life. Somerset East farmer Andries Botha and Faith Like Potatoes movie producer Frans Cronje also inspired men with their moving personal testimonies.

The Karoo MMC which was held from Friday April 29 to Sunday May 1, was the last of the regional MMCs for 2011 which were initiated this year at the instigation of Buchan who said it was time to pass the baton to others after hosting MMCs on his Greytown farm for seven consecutive years. In March MMC events were held in Paarl and Polokwane.

Jannie Moolman, whose Middelburg farm Rusoord was the site of the Karoo MMC, and his team of local organisers did a sterling job of preparing the venue and blessed many by exercising the faith to take on the financial risk that went with staging the event. The huge stage, sound and lighting were impressive and musicians Retief Burger and Joe Niemand combined well in leading worship throughout the weekend. Niemand’s “Ek sal nie bang wees nie” was a popular theme song for the conference and picked up well on the recurring message of living a courageous Spirit-filled life. A large cross erected on a koppie against the backdrop of the Renosterberg mountains was a feature of the venue and prompted Buchan to quote from Psalm 121, which says: ” I lift up my eyes to the mountains— where does my help come from? My help comes from the LORD, the maker of heaven and earth”.

During conference sessions many men responded to invitations to commit their lives to Jesus or to put their faith into practice in family, business and ministry. Two men, a father and son,  who made first time commitments to follow Jesus during the Saturday morning, told me they had nearly not attended the KMMC but had finally, reluctantly made the journey. Another man who had been to other Mighty Men conferences brought a group of recovering drug addicts with him to Rusoord. Stories like these reflect something of the unique, transforming character of South Africa’s Mighty Men phenomenon. “We are in revival,” said Buchan. “We are not waiting for revival. It is here. Don’t miss it. Nowhere else in the world are men meeting in their thousands like this.”

Most of the men at the KMMC camped there for the weekend. Most were unprepared for the biting cold conditions in the early hours of Saturday morning when the mercury dropped to minus three degrees centigrade. Surviving the cold hours was accepted as part of the challenge of the Karoo MMC experience, and the sunny days, warm fellowship, inspiring input and majestic scenery more than compensated.