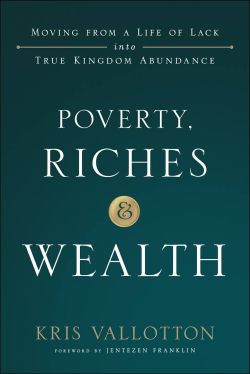 Money is one of those hot potato topics in Christian circles. It also happens to be a very important topic. And so my interest piqued when I was given an opportunity to review the latest book (just released this week) by best-selling author and senior associate leader at Bethel Church in California, Kris Vallotton, titled Poverty, Riches & Wealth

Money has been on my mind lately as I have been trusting God for more resources to pursue a dream of radically-expanding our kingdom news service. I was also fascinated to hear recently that evangelist Benny Hinn has said that he misrepresented biblical prosperity for years — and now understands that biblical prosperity means having no lack.

So, I was really interested to read what Kris Vallotton would have to say on this subject. A few years ago while visiting family in Redding, California I had the privilege of listening to Vallotton preaching an edifying series at Bethel on another hot potato topic — women in leadership in the Church — a theme he explores in detail in his book Fashioned to Reign: Empowering Women to Fulfill Their Divine Destiny.

Kingdom wealth
Poverty, Riches & Wealth is divided into two sections. In the first part the author sets out to discuss the true meaning of kingdom wealth (whose greatest effect he describes as its positive influence on others) as he contrasts it with poverty and riches. In the second part of the book he offers practical ways — including business skills and kingdom principles — to grow your capacity for wealth, and encourages you to embrace your God-given identity and fulfil your divine purpose as a history-maker.

Vallotton has lived an interesting life, growing up in poor circumstances with a bias against rich people; coming to Christ at the age of 18; owning nine businesses over 20 years; nearly having to declare bankruptcy after an unexpected setback; being at the forefront of the journey of an influential church; and lately becoming financially prosperous.

In his latest book he shares fascinating testimonies — both highs and lows — from his life story. One pivotal testimony involves a series of experiences of divine favour over three years in which all of his substantial debt was either forgiven or paid off by benefactors.

Writing about this time he says: “Wonderful, right? Sort of, except it unearthed a problem so deep in me that I had no idea it was even there.” The idea that people would help him because they loved him, without any thought of getting something in return, drove him to a “crisis of soul”. He discovered a problem of self-hatred and low self-worth that had plagued him since boyhood. “I was suddenly aware that I had a poverty mentality that was inoculating me from wealth,” he writes.

A mindset problem
Vallotton goes on to argue that poverty is primarily a mindset and he offers biblical solutions to address the problem.

He uses two interesting lists of contrasting statements to explain some of the differences between poverty, riches and wealth — and support his contention that all believers should be wealthy, but not rich. Here are just a few excerpts from his lists:

This revelation-packed — and practical — book spans too many themes to mention in this review — sacrificial generosity; overcoming complacency and a ‘rapture syndrome’, adopting a hope-filled, persevering, unlimited-thinking approach; the company we keep and revelation out of intimacy with God; and reward as a kingdom motivator; to name a few.

I will just single out one more chapter from part 1, which has the interesting title: Money Is NOT a Measure Of Spirituality, Unless It Is. He begins the chapter with a statement that the “prosperity gospel” was one of the most destructive heresies of the 20th century. Then, referring to the lives of biblical heroes and lessons from Scripture, he makes a case for the reality of a supernatural power for wealth, which he admits may sound like the prosperity gospel if not followed with discernment. Read it.

As the editor of a news service called to tell the God stories of Africa, I was drawn to a paragraph in the book in which Vallotton says resource-rich Africa’s problem is not money but a lack of revelation and understanding. But drawing from a principle found in the biblical account of Joseph’s handling of Pharoah’s dream (explained in the book), he says Africa’s position is reversible. “In fact, the dream is alive as many African believers who are becoming friends with God are changing the continent with their revelations and insights. It is just a matter of time before Africa will be one of the wealthiest continents in the world,” he writes.

I say “Amen” to those observations. We (Gateway News) have met and shared the stories of a few of those African kingdom dreamers and big-thinkers. And we will be sharing more.

Poverty, Riches & Wealth is available for purchase at amazon:https://goo.gl/oYVnXn #povertyricheswealth