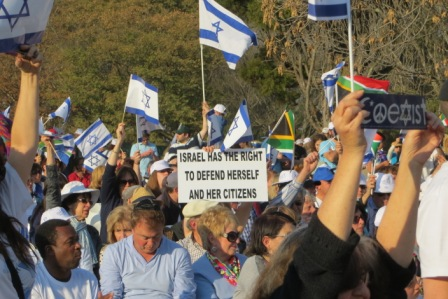 A pro-Israel rally under the auspices of the South African Zionist Federation, in Johannesburg on Sunday afternoon drew over 10 000 people, reportedly the largest pro-Israel rally ever to have taken place in the African continent.

The rally, which included a wide spectrum of political views and cultures, evoked enthusiastic comments about its “overwhelming success”. The sheer size of the multiracial crowd represented a broad slice of South African society. The rousing speeches indicated, said a speaker, that support for Israel was much stronger than it seemed in the face of the hostile public domain. “Let the government take note,” he said, “that millions of South Africans love Israel!”

​​​There were smile and warm embraces aplenty as Jewish supporters of Israel, black African Christian groups who were bused in in their hundreds, representatives of three South African political parties, and various other Israel supporters mingled together. The rally was at Huddle Park in Linksfield, a municipal golf course and function venue.

Responding to fears about a repeat of incidents of violence from anti-Israel elements like BDS in European cities, security was extremely tight. Police were present in large numbers, as well as Jewish community security, and many of those arriving were asked for identity documents. The pre-publicity for the event had repeatedly assured people that “excellent security will be provided”. As it happened, there were no violent incidents or confrontations.

“We are living today in an upside down world, where the villains are regarded as heroes and the victims are called the villains,” said Chief Rabbi Warren Goldstein, addressing the cheering crowd waving thousands of Israeli and South African flags. “But we are not afraid… Israel was promised to the Jewish people some 4 000 years ago, and it is the land which belongs to the Jews.”

Ben Shwartz, an organiser, welcomed onto the stage the charismatic Olga Meshoe, daughter of Kenneth Meshoe, the leader of the African Christian Democratic Party, which has an openly pro-Israel policy as part of its basic platform. Meshoe has created an organisation called Deisi whose specific mandate is to support Israel.

Olga Meshoe
She proclaimed loudly, to enthusiastic applause, that “Israel is not alone, and the Jewish people are not alone… And to the Jewish students studying at universities across South Africa who feel afraid to say they support Israel in the anti-Israel atmosphere on the campuses, I say to you, we have your back, we are with you! You are not alone!” 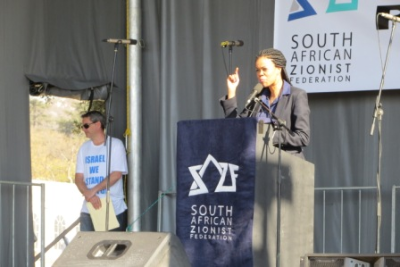 Adding to the diversity, black members of the Inkatha Freedom Party (IFP) arrived dressed in Zulu attire, performing traditional dances waving Israeli and South African flags – joined by several Jewish “dancers” who mimicked them fondly. The leader of the IFP in Gauteng brought official greetings from the party and its leader, Chief Mangosuthu Buthelezi. The IFP has long been friendly towards Israel.
They were joined by members of the Impact of Christ Ministry and other groups. At one point, dancers from the Shembe Church came onto the stage, performing their own tribal dance.

In the SA political landscape, supporting Israel makes it likely a party will lose the important Muslim vote. Yet another party, Cope, sent a representative, to the surprise of many. People among the crowd noted sarcastically that no-one from the ANC would come.

Explicit support for the two-state solution to the Israeli-Palestinian conflict was a recurring theme, and that Israel wanted peace with its Palestinian neighbours. Several hundred white doves were released during the singing of a Hebrew song about Jerusalem. They circled above the gathering for several minutes before flying off, as if they had been choreographed – but it was pure chance.

Left-wing SA Jews outside of the mainstream who differ in attitudes towards the conflict often complain about being ostracised for dissenting. A small group of 30 from an organisation called Jewish Voice for a Just Peace, gathered across the road to the park’s entrance, calling themselves “Joburg Jews” in opposition to “Israel’s war on civilians”. During the traffic jam at the beginning of the rally, a convoy drove past hooting to this group, waving Palestinian flags, and calling out to “Our Jewish brothers who support us!”

When SAJBD President Zev Krengel thanked President Jacob Zuma for his “balanced” approach to the crisis in Israel and Gaza and for being willing to listen to both sides, his comment touched a raw nerve among South African Jews.

The government is regarded as basically hostile to Israel, illustrated by recent negative statements by senior ANC officials such as deputy secretary-general Jessie Duarte, comparing Israel’s actions to the Nazis. There have been anti-Semitic tweets doing the rounds from ANC bodies commenting about Hitler being right in his attitude to Jews. The SAJBD responded by issuing damning press statements, sending a protest letter to Zuma, and even lodging a hate speech complaint to the SA Human Rights Commission.

The gathering ended on a high note after three hours, with the South African national anthem and the Israeli one. Whether this rally amounted to the converted talking to the converted, or will have a wider impact, remains to be seen.

BDS is planning more rallies of its own, and if the killing in Gaza is still ongoing, the horrendous images coming out of Gaza and Israel, will provide it with more ammunition.