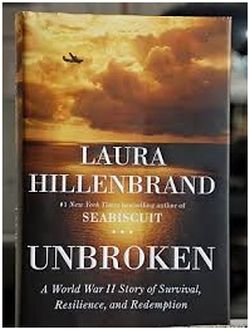 This is one of the most riveting true life accounts that I have recently read. Once you start it, you cannot put it down!Like

The life story of Louis Zamperini (1917–2014) is truly remarkable! Agony, ecstacy, despair, hope, survival, adventure, determination, the will to live against all the odds, are wrapped up in this epic story. Angelina Jolie has now produced a film version, which is now showing in South Africa. It is well worth a viewing!

This man’s story is truly awe inspiring. How he survived against all the odds is absolutely astounding.

The author spent hundreds of hours in interviews with all the main characters, and scoured P.O.W. and war records to substantiate the epic story with all the background information. She has a lucid, gripping and penetrative style of writing, which is easy to read. 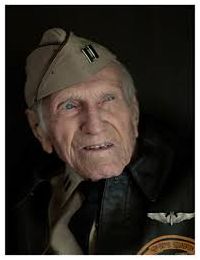 The book details Louie’s turbulent and insolent upbringing. Louie’s brother, Pete, plays a huge encouraging role in his life, setting him on a meteoric rise in middle distance running. Were it not for the USA being drawn into the war in the Pacific, it is quite conceivable that Louie would have been the first man in history to have run the mile distance in under four minutes!

Louie joins the USA Airforce as a bombardier, serving in a squadron of B-24s. Their operational stints are action packed with miraculous escapes against all the odds. Their plane crashes into the ocean during a mercy flight. Louie and two fellow soldiers (Phil and Mac) were trapped on two rafts for 47 days before they were captured by the Japanese. During this time, they survived by catching albatrosses and terns by hand; they fought off marauding sharks; plus a strafing by a Japanese bomber.

“The Bird”
In the POW. camp, they encountered Mutsuhiro Watanabe, the military officer – known as “The Bird”, who held and mercilessly tortured Louie. He was an awful, sadistic villain and criminal. The degradation that these men faced is absolutely soul destroying and difficult to comprehend! To think that men can treat other people in such dehumanising fashion is truly reprehensible!

Louie became a very broken man – horribly broken by sin and then mercifully broken, then redeemed and restored by God.

After the war, Louie fell into a violent vortex of degrading psychological torment and turmoil. He married Cynthia, but his life spun out of control – known today as “Post-traumatic stress disorder”. Hillenbrand says, “They carried unspeakable memories of torture and humiliation, and an acute sense of vulnerability that attended the knowledge of how readily they could be disarmed and dehumanized” (page 349).

Louie came to the conclusion that the only path to freedom was to kill the Bird. He began plotting a mission to murder the man who had ruined his life and now patrolled his nightmares. He wildly and foolishly invested the family’s money in dead ends, trying to scrape together enough to finance his murderous dream. Bloody vengeance against Mutsuhiro Watanbe had become this broken hero’s only hope.

In the fall of 1949, Billy Graham held a campaign in Los Angeles. Cynthia heard Graham’s gospel, surrendered her heart to Jesus and informed Louie that she no longer wanted a divorce.

She pled for Louie to attend, which he eventually did.

Graham preached: “Darkness doesn’t hide the eyes of God. God takes down your life from the time you were born to the time you die. … [He will] pull down the screen and shoot the moving picture of your life from the cradle to the grave, and you are going to hear every thought that was going through your mind every minute of the day, every second of the minute, and you’re going to hear the words you said. And your own words, and your own thoughts, and your own deeds, are going to condemn you as you stand before God on that day. And God is going to say, ‘Depart from me.’” (page 373)

Rescued again
This sent Louie spinning, and he eventually stormed out before Graham was finished. But it would be the beginning of the end of Louie’s resilience. He had survived opposition before, but nothing like this. The next day, under the powerful preaching of the cross, Louie Zamperini was born again – rescued again!

In the end, Louie was broken after all, but not by the Bird. God has done what the Bird, weakened by the flesh, could not do, by sending his Son, Jesus Christ—and then a tall, blond-haired messenger named Billy Graham. God had painted yet another picture of His perfect patience, saving the foremost of sinners (1 Timothy 1: 15-16) — the selfish, angry, violent, abusive, murderous and unforgiving alcoholic.

The true climax of Louie Zamperini’s story is his second visit to Sugamo Prison. Standing inside the walls that had watched him suffer so badly, he now looked into the eyes of many of the very men who had inflicted the blows. For the first time since the war, he was seeing the faces of his pain and humiliation. How did he respond? Did he devolve into a seizure of violent screaming? Did he silently burn with fear and rage? No. “Louie was seized by childlike, giddy exuberance. In bewilderment, the men who had abused him watched him come to them, his hands extended, a radiant smile on his face” (page 380).

He later wrote a letter to the Bird:

“As a result of my prisoner of war experience under your unwarranted and unreasonable punishment, my post-war life became a nightmare. … But thanks to a confrontation with God through the evangelist Billy Graham, I committed my life to Christ. Love replaced the hate I had for you.”

Forgiveness, not survival, was the victory laurel of Louie’s life.

So when you see the movie, and enjoy Louie stepping back into freedom, savour the steps he would take years later into true freedom—freedom from anger, depression, alcohol, fear, violence and revenge. Freedom that would last through eternity.