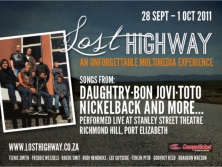 The show, which runs at the Stanley Street Theatre, Richmond Hill, from Thursday Septemeber 28 to Saturday October 1, will stimulate your thinking about God, salvation
and father-son relationships.

The idea for the project was birthed a few years ago out of a vision of drummer, producer, Lex Gutsche’s, to use music to tell a story. So the project went from music to story, not the other way around as is mostly done! Gutshe surrounded himself with talented musicians and people that believed in the concept and dreamt the dream with him.

Bookings for the show can be made on Computicket.

Feedback from one spectator (a multi-media professional) who watched the show last night was: “Very good – great band, cool stage set up and the multi-media experience was cool and unique.”