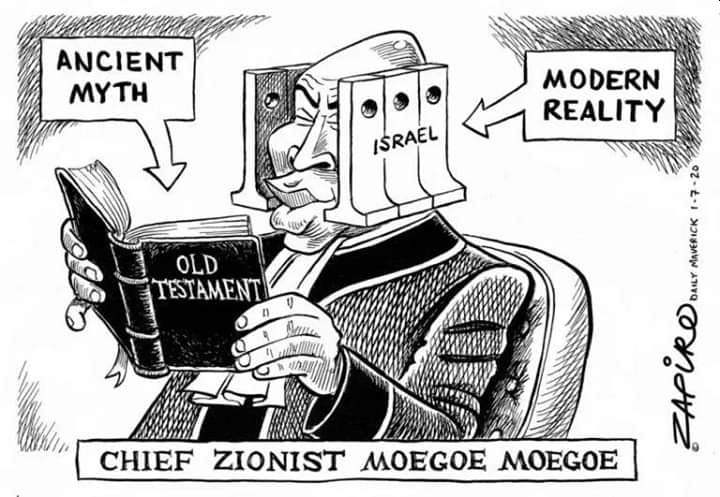 Christian Consensus in South Africa emailed a letter to the editor of Daily Maverick on Monday asking for a public apology from the online newspaper and cartoonist Zapiro for publishing a cartoon (see above) that ridicules Chief Justice Mogoeng Mogoeng and the Bible.

In the letter on behalf of Christian Consensus Dr Arno van Niekerk says calling the chief justice “Moegoe Moegoe” is “appalling and defamatory” and calling the Old Testament an “ancient myth” is unacceptable to Christians.

“Your freedom of speech again crossed the line by oppressing our freedom of religion,” says the letter, which advises that the matter will be taken to higher authorities if a public apology is not forthcoming within a week.”

And the response from the editor, Branko Brkic? — “Whatever,” says Van Niekerk.

“He made similar replies to other members of Christian Consensus who emailed their disapproval. It shows that they do not recognise the voice of Christians but the good thing is that many Christians have been sending emails, so at least they are getting the message.

“Christians are standing up for freedom of religion and our faith,” he said.

The cartoon by controversial veteran political cartoonist Zapiro, whose real name is Jonathan Shapiro, is clearly a biased response to remarks that Chief Justice Mogoeng made about Israel during a recent webinar. Mogoeng’s remarks offended the ANC, BDS and others who label Israel an apartheid state, which ironically is the real myth in the picture.

To be fair to him, the talented and much-admired Zapiro has offended prominent people in just about every political camp in South Africa and his satire once drew the ire of the SA Muslim community.

But Christians are rightly not amused by his mockery of the Bible and trampling on freedom of religion. And interestingly, a visit to his Facebook page, confirms that his Mogoeng cartoon got a thumbs-down from many. It may not be enough to make him apologise but perhaps it will make him think.

Here are several comments about the cartoon from Zapiro’s Facebook page:

Alistair Herbert This is far and away Zapiro’s weakest drawing ever. Trying to drive his own narrative he is losing it.

Philani Bright-Cossa Zapiro! Khuzeka! It’s not an ancient myth, it is the word of God!

Vasilis Karvelas I’m not religious, but I’m also not obtuse enough to insult the religion of millions of people

Theuns Zeeman I use to regard Shapiro as someone with great insight into political and social issues that influence especially vulnerable people, but I have lost all my repect for him, since he started to mock religion. Absolutely disgusting!