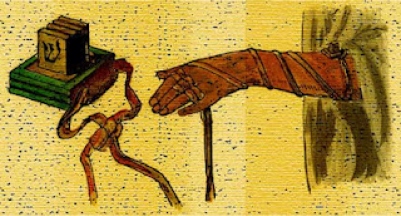 With the recent concerted efforts of several mobile phone companies, prominent banks, and even the Canadian Royal Mint, towards the introduction of cashless transactions through mobile phones, there are growing concerns among some Christian groups that the prophecy of the mark of the beast is at hand (no pun intended).

Indeed some Christians (predominately Catholic) are arguing that the prophecy of the mark of the beast may have already been fulfilled in the shape of modern smartphones. In a break from the now traditional Fundamentalist Christian interpretation of the mark of the beast as the future compulsory introduction of RFID microchip implants by a coming One World Government, a recent book called Unveiling the Apocalypse by Emmett O’Regan argues that by looking at the original text of the Book of Revelation, it can be determined that the so-called “mark” of the beast, was understood by the early Christian community to be a physical object worn in the hand, rather than some form of brand or tattoo.

The vast majority of theologians concur that the original prophecy of the mark of the beast was based on a parody of the Jewish practice of wearing phylacteries, which are small box-shaped objects bearing the name of God, which are worn on the hand and forehead during prayer services to observe the Shema of Deut 6:4. In addition to this, the Greek word used usually translated as “mark” in this instance – charagma, also has an alternative definition in the various Hellenistic Greek Lexicons as a “graven image”, referring to a sculpted object. So it is argued that the original text of the Book of Revelation prophesies that towards the end of the world, no one would be able to buy or sell without some form of graven image worn in the hand – an object which resembles a diabolical inversion of the box-shaped phylacteries worn by Jews in the first century AD. It is thus suggested that the only modern day equivalent of box-shaped objects worn in the hand as a necessary component of commerce, is the stark reality that smartphones are set to replace credit cards as a means of electronic commerce through NFC technology in a coming cashless society. Indeed a recent study commissioned by PayPal, has predicted that payments through mobile phones could replace cash transactions on the high street by as early as 2016 (see here).

Another aspect of this future reality which is used to bolster the smartphone/mark of the beast equation, is the fact all future electronic commerce through NFC technology will be conducted through the worldwide web – which is commonly abbreviated as www. The author of Unveiling the Apocalypse points out that the numerical equivalent of www once transliterated into Hebrew is six-six-six. The Hebrew letter waw is the equivalent of the letter w in the Latin alphabet, and is also used as the Hebrew numeral 6 – so three of the letter w has the numerical equivalent of three sixes in the original language of the author of the Book of Revelation. It is widely acknowledged by New Testament scholars that the use of a form of Hebrew numerology known as gematria is behind the mystery of the number of the beast. The name Nero Caesar, for example, has the numerical value of 666 in Hebrew gematria, and is thought by many theologians to be the name of the person behind the number of the beast. And in addition to this is the fact that the Greek word used for “beast” – therion, also has the numerical equivalent of 666 once transliterated into the Hebrew alphabet.

You can find various pieces of information on this subject, as well as a link to a detailed sample chapter from the author’s book on this subject, on the following website: http://unveilingtheapocalypse.blogspot.co.uk/2011/08/mark-of-beast.html