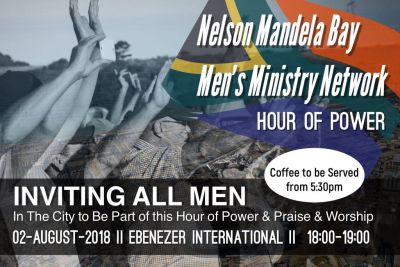 Men’s Ministry Network (MMN), a new movement that hopes to unite men across church and race lines in Nelson Mandela Bay, is hosting an “Hour of Power” — a praise and worship event — at Ebenezer International Church in Algoa Park on Thursday August 2 from 6pm to 7pm.

With all the negative publicity that men have been getting with movements such as #menAreTrash, it is now time for men to take their stand and be the leaders that God called them to be, said Pastor “J” (Lingelihle Jadezweni) who was one of the organisers of a successful Men of Hope conference and men’s march in New Brighton in May.

Trevor Jennings of Transformation Christian Network said MMN would like to see men’s ministries established in every ward.

“A lot of churches already have established men’s ministries. So we encourage all the men from different churches in the city to all come together once a quarter to worship together,” he said.

He said a goal of the movement was for men to encourage each other in their walk. Moreover, men needed to break down the racial and cultural walls in the churches – trying to do away with the so called “white church” or “black church” or “coloured church”.

“To encourage churches, especially the white people in the churches, they need to be able to worship and praise God in other African languages”, said Jennings.

Andrew Auld, who leads the annual Kingdom Manne Kamp said the heart behind MMN was to grow men’s ministry in the city in a coordinated way so that men could stand together with a common vision.