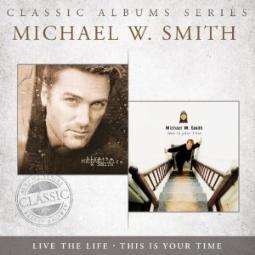 This series has 2 CDs: “Live The Life” and “This Is Your Time”… and they are a real blast from the past!:)

This CD was originally released in 1998.  The song ‘In My Arms Again’ was a song written for the Titanic.  Originally there were 26 songs written and completed for this album but eventually 12 were chosen, with many of the original 26 that didn’t make it on this album finding themselves a spot in ‘This Is Your Time’, which is the second CD in this compilation.  ‘Song For Rich’ is a beautiful instrumental tribute to Rich Mullins who in 1997 died in a car accident.

“This Is Your Time”

This album was released in 1999.  All the songs on this album, except for ‘This Is Your Time’, were previously recorded for ‘Live the Life’.  ‘This Is Your Time’ was inspired by Cassie Bernall who was one of the students that was killed in the Columbine High School shooting spree.  She is believed to have been shot after answering ‘yes’ to her faith in Jesus.  It is a very moving song.