THE FATE OF THE FURIOUS
MOVIE TRAILER: https://www.youtube.com/watch?v=NxhEZG0k9_w
13VL 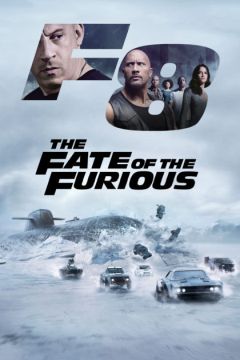 Summary:
The Fate of the Furious, the eighth instalment in the famous franchise, has Dominic, the street racer turned government spy, betraying his team, including his wife Letty, because a hacker villain has leverage over him and needs his help stealing weapons of mass destruction. The Fate of the Furious ramps up the action and humour, and has a strong Christian, moral worldview with many overt, positive Christian elements, but also has lots of foul language, images of women in short shorts in one scene, and plenty of intense action violence, so strong caution is advised.

MOVIEGUIDE REVIEW — “A Funnier, Even More Action-Packed, Emotional Entry with Lots of Heart”

The Fate of the Furious is the eighth instalment in “The Fast and the Furious” franchise, and like the previous movies, delivers exactly what fans of the franchise expect, lots of fast cars and ridiculous action. Like some of the recent sequels, however, there are some overt positive references to Christianity among the heroes.

Fate starts off after the events of Furious 7” where the filmmakers gave Brian O’Conner a proper farewell after actor Paul Walker’s tragic death. Dominic Toretto (Vin Diesel) is enjoying a long-delayed honeymoon in Havana, Cuba with his wife, Letty. However, their honeymoon’s cut short when a mysterious blonde woman known as Cipher (Charlize Theron) confronts Dom. After showing Dom what kind of leverage, she has on him, she convinces him to work with her.

Soon after, former DSS agent Luke Hobbs (Dwayne Johnson) informs Dom of a new mission for the team in Germany, so Dom gears up. On the mission, which involves Letty, Roman (Tyrese Gibson), Tej (Ludacris), and Ramsey, the new computer hacker on their team, Dom betrays the team like he’s told to do by Cipher. He steals the EMP weapon the team was trying to secure for the government.

With Dom now gone rogue, Frank Petty (Kurt Russell), the leader of a covert operations team that worked with Dom and his friends in the past, puts together his bandwagon of individuals to stop Dom and Cipher from pulling off whatever dastardly plan Cipher has in store. On Frank’s team is Dom’s former crew, Luke Hobbs, and their previous nemesis, Deckard Shaw (Jason Statham), who was broken out of prison to help them.

Letty believes Dom still cares about her, and the team, because Dom would never break the “family first” code by which he lives. However, as they face off with Dom on the streets of New York City, it becomes unclear if he’ll ever be able to break free from whatever grip Cipher has on him. The plot thickens as Cipher, with Doms help, is able to steal nuclear launch codes. Will the team be able to stop this unstoppable female villain and save Dom?

The Fate of the Furious won’t convince anyone that the plot is somehow fresh and new, nor does it try to do that. It’s a fairly straightforward story of betrayal, conflict and jeopardy, with ginormous action sequences and emotionally uplifting storylines that mostly work because moviegoers are eight movies into the franchise and have actually grown to care about the characters. Somehow, The Fate of the Furious has topped stunts from previous movies in the franchise, with sequences that take car carnage to whole new levels, including a race on a frozen bay against a Russian submarine. Perhaps the weakest point of the plot is the female villain, Cipher, who lacks compelling motivation for her evil plot, although she’s a pretty bad-lady moviegoers will love to hate. Perhaps because the movie misses the pleasant charm of Paul Walker, FATE smartly takes itself a little less seriously by including much more humour. The result is a fun, always entertaining, time at the movies.

Staying true to the theme of the franchise, the movie extols the importance of family and fighting for one another, even when it seems like they’re fighting against you. While Dom betrays his team and wife, it’s revealed that he does so for good reasons, though some viewers probably will question why he couldn’t have brought his family in on the secret in the first place.

Best of all, the movie once again includes a significant amount of positive, overt and implied Christian content. Dom frequently wears a cross necklace, which serves as a major plot element in the movie, and symbolically and literally saves his family. Also, in the middle of another action sequence, when the team asks what they should do, Roman says, “Now we pray.” Most touching and impactful is at the end in the final shot when the group gathers together around a meal and prays together.

Sadly, The Fate of the Furious isn’t without its blemishes. The movie has too much foul language, including several strong profanities, many uses of the “s” word and one “f” word. Also, in the opening scene in Cuba, there are gratuitous shots of scantily clad women in skimpy bikinis and short shorts, and the camera ogles women from behind a couple times. This content, along with some strong action violence, warrants strong caution for moviegoers, especially media-wise families. – www.movieguide.org