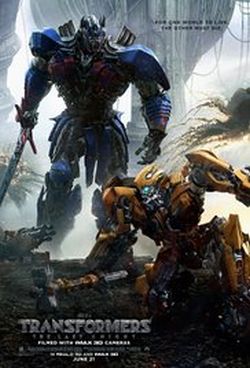 Summary:
In Transformers: The Last Knight, the Autobots and the humans are at war because Optimus Prime is nowhere to be found. Though overlong, with some unnecessary scenes, Transformers: The Last Knight is still fairly entertaining, with a strong Christian, moral worldview, but it’s marred by an excessive amount of gratuitous foul language and some references to magic.

Movieguide Review — “Saving Robots and Damsels in Distress”
Evidence of the end times are upon the world, and Optimus Prime is nowhere to be found, in Transformers: The Last Knight. Transformers: The Last Knight is an entertaining movie throughout with some strong Christian, moral elements, but it’s marred a lot by frequent foul language, plus some magical story elements, so extreme caution is advised.

Optimus Prime is no longer on earth helping to guide the Transformers or Autobots. His absence has led to a war between mankind and the sentient Autobots. Meanwhile, Cade Yeager spends his time trying to save the Autobots from the government group named TRF that’s trying to bring them down. Because of this, he’s considered a felon and can’t even talk with his beloved daughter. Cade has hired Jimmy to take care of the Autobots hiding at a junkyard.

One day as Cade is fighting against the TRF, he finds a young girl named Izabella, who’s also trying to save the Autobots. Izabella believes the Autobots are like family and helped her in a time of need. She’s learned how to fix and repair them, but still Cade doesn’t want her around. Of course, Izabella follows Cade to the junkyard, where she shows him her abilities of fixing the Autobots.

However, the Decepticons, an evil group of Autobots, find the good Autobots in the junkyard and a fight ensues. During the fight, Cade is saved by an Autobot he doesn’t know. This Autobot, named Cogman, tells Cade he’s is needed by Sir Edmund Burton to help save the world.

Cade goes with Cogman and meets Sir Edmund, who has also brought in a beautiful woman named Vivian Wembley who works at a museum explaining old Earth myths and legends. It turns out Vivian is directly related to the wizard Merlin, and Merlin held the power to a staff that a Transformer gave him during the Middle Ages. This staff creates Transformers but has the power to destroy mankind. The only human that can use the power of the staff is Merlin’s descendant, Vivian. Also, Sir Edmund reveals that Cade is the only living Knight worthy to protect the Transformers and mankind. Sir Edmund has summoned Vivian and Cade to come and help, because he sees signs of the end times, including the possibility that an evil Transformer is trying to get the staff.

Cade and Vivian must now put themselves in harm’s way to save mankind.

Transformers: The Last Knight is an entertaining popcorn movie. This Transformers definitely follows the Michael Bay pattern of movies, with lots of action, fighting and fun. The issues with the movie include a convoluted plot line that could have been condensed with better writing and editing. The Last Knight clearly didn’t need 150 minutes to tell this story, which includes some unnecessary scenes and plot holes. That said, though the average critic probably won’t like this movie, the average moviegoer probably will enjoy the ride, just like they have with the other Transformers movies, despite their imperfections.

Better yet, The Last Knight has a strong Christian, moral worldview about sacrifice and family. The hero is always willing to make sacrifices for the Autobots and his family, even if it puts him in jeopardising, death-defying positions. The movie also contains two scenes set in churches with images of Jesus and the Virgin Mary. Moreover, a character even says at one point, “Let God sort it out.”

Sadly, though, Transformers: The Last Knight has an awful lot of gratuitous foul language and some mentions of magic, plus a lot of intense action. So, MOVIEGUIDE advises extreme caution. — www.movieguide.org