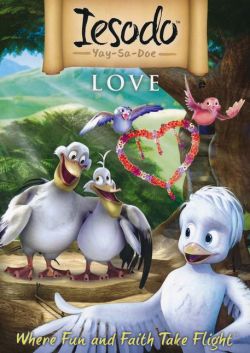 Synopsis:
Iesodo (pronounced Yay-Sa-Doe) and his friends live in the Holy Land, in a beautiful Cypress Tree on the shores of a vast Lake (or as we know it, the Sea of Galilee). These birds are an unlikely group of friends, and though they have their differences, they have one thing in common: since they met Iesodo, their lives have never been the same. Now they’re out to spread his message of hope to the entire bird world!

Birds of a Feather Fish Together — The wedding celebration of Freddie and Fiona Finch is headed for disaster! Jack and Jacob will have to stop arguing and work together or they’ll never catch fish for the wedding feast. Meanwhile, Barry is concerned that the party guests will run out of nectar. Iesodo steps in to calm everyone’s ruffled feathers and make the event a success!

Love Your Enemies — Zack the tax collector doesn’t play by the rules. When the flock decides to take matters into their own wings, Iesodo shows them that treating those who are mean to us with kindness makes a big difference, and everyone is capable of changing.

Dove Review:
Here is another collection of the Iesodo series. The two charming stories in this collection deal with friendship and working together in the bird world. Iesodo is a beautiful white dove that brings changes to the world of birds. He shows all the other birds the right path to take, the importance of kindness, helping others and sharing with others.

In Birds of a Feather Fish Together, the Pelican brothers need to work together to catch fish for the wedding but all they seem to do is argue about who is better at catching fish. But Iesodo helps them see that by working together they can get the job done and not let the others down. He also has faith that there will be plenty of nectar for the wedding.

In Love Your Enemies, Iesodo teaches the birds to love their enemies no matter who they are as he gets Zach the bird tax collector to see his wrong doing and gets the other birds to make Zach their friend. A lesson of sharing is shown to be better than taking.

These two stories are parables of those in the Bible regarding the work of Jesus. They will entertain the entire family with this colourful animated series. We are proud to award these two tales the Dove “Family-Approved” Seal for all ages. — www.dove.org 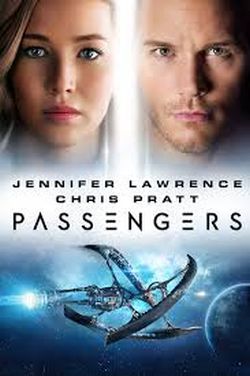 Summary:
A spacecraft traveling to a distant colony planet and transporting thousands of people has a malfunction in its sleep chambers. As a result, two passengers are awakened 90 years early.

Dove Review:
Passengers is a fascinating movie that works especially well due to its lead actors, Jennifer Lawrence and Chris Pratt. Left in other actor’s hands, it probably doesn’t hold the audience’s attention as well. Lawrence and Pratt have chemistry in this Titanic-like story, with the plot taking place in space. However, the ending is a bit happier than that of the ill-fated Titanic.

An interstellar ship, which holds 5 000 passengers, is bound for Homestead II to establish a colony. The journey will take 120 years with the passengers in suspended animation. However, a technical failure results in Jim Preston’s (Pratt) hibernation pod opening early. He lives alone for an entire year, as he is unable to awaken any fellow passenger or crew member. He only has contact with an android bartender named Arthur (Michael Sheen). He swims, plays basketball, and tries to fill his need for companionship, but to no avail. Finally, after contemplating suicide, he frees a writer from her hibernation pod, a beautiful young woman named Aurora Lane (Lawrence). He had watched videos of interviews with her and found her to be interesting and lively. Thinking she was freed accidentally, she soon takes to Jim as he does to her, and they become a couple, falling passionately in love. Then she learns he purposely freed her, and she becomes as cold as an iceberg to him. Only a tragedy, and her dawning realisation of how lonely Jim was, allows her to mend her relationship with him.

Jim finds a way to send her back to sleep in her hibernation pod. Will she accept? Or is she happier to stay awake now? Many of their challenges include the possibility of the ship burning up. It’s unfortunate, but due to nudity and sexual situations, we are unable to award our Dove Seal to this intelligently written film. — www.dove.org