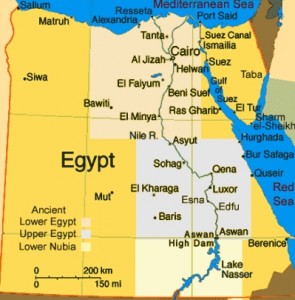 On Saturday (June 25) in Awlad Khalaf village, just outside Sohag, 240 miles (386 kilometers) south of Cairo, local Muslims attacked Coptic Christian Wahib Halim Atteyah, robbed him of 32,000 Saudi Riyals (US$8,530), and bulldozed his home along with the other structures on his property, according to local media. The group then raided six other Coptic-owned homes and burned them to the ground. Most of the stolen items were returned because of efforts of other Muslims in the area, according to Egyptian newspaper Watani.

Villagers had begun circulating a rumor that Atteyah was constructing a church building on his property. Atteyah was reportedly building a house but also built a barn and a livestock facility in violation of a permit that allowed him to build on 95 square meters of land.

Atteyah and another Coptic Christian, Ihab Na’eem, were later arrested. Reports of the specific charges varied, but all said they had to do with the Christians allegedly repelling the attack with firearms, a charge Atteyah said was untrue. Two Muslims accused of setting houses on fire also have been arrested.

At least five Muslims and one Copt were reportedly injured in the attack. Security forces have been deployed to protect the remaining Coptic homes in the area.

Efforts to reach Thabet and other members of the Minya Diocese were unsuccessful, as were attempts to contact Atteyah.

In a previous incident on Thursday (June 23) in Beni-Ahmed al-Gharbiya village near the town of Minya, 136 miles (220 kilometers) south of Cairo, a group of Salafi Muslims surrounded the Church of St. George and demanded that the parish priest, the Rev. Gorgy Thabet, leave the village or they would kill him and hold Muslim prayers in the church building. Salafis, who form a hard-line Islamic movement with extremist tendencies, pattern their belief and practices on the first three generations of Muslims.

Security police kept the mob from breaking into the church building, then removed the priest from the village. It was not known if there were any injuries in the incident.

Last week’s problem at the St. George church had its roots in an incident that happened there more than two months prior. In March, groups of Muslims protested at the church site after learning the congregation had begun expanding a building on church property. After the Muslims forced the Christians into a “reconciliation meeting” by threatening to attack the church building, the expansion project was abandoned.

The group also demanded that Thabet leave. Church officials refused, but then removed the priest temporarily in an apparent attempt to appease Islamic extremists in the community.

Problems started afresh when the self-imposed banishment ended last week. In a press statement published in Watani newspaper, the office of the archbishop of Minya stated, “Crowds of hard-line Salafi Muslims, some of them carrying arms, have resumed their demonstration around the church of Mar-Girgis in the village of Beni-Ahmed al-Gharbiya, threatening to kill the priest, Father Gorgy Thabet, if he does not leave the village.”

The statement added that the protestors in question had no right to make their demands.

“Serving the congregation is a question which concerns the church alone, and no person or movement outside the church has any right to interfere in it,” according to the statement.

The two attacks last week broke a relative calm that has existed in Egypt since late May, when a group of Muslims surrounded a church in Ain Shams, Cairo and prevented it from being reopened. The week before that, a group of Muslims attacked two church buildings in Cairo, setting one on fire.

At least 12 people were killed and more than 200 were wounded when members of the Salafi movement attacked two churches and surrounding Christian-owned homes and businesses in a poor section of Cairo on May 7. The Salafi Muslims set fire to one of the two church buildings, leaving most of it gutted.

The arson attack on the Virgin Mary Church in Imbaba was one of many recent assaults on Coptic Christians by members of the Salafist movement. The mob first attacked St. Mina Church in Imbaba on May 7 after a rumor spread that a Coptic woman who allegedly converted to Islam was being held in the church against her will. Clergy members of St. Mina allowed a group of Islamic imams into the church building to search for the woman, and the imams declared to the gathering Muslims that the woman wasn’t in the building, according to witnesses at the scene.

After unsuccessfully trying to push through the barricades, the mob went to the Virgin Mary Church, an undefended building a 10-minute walk from St. Mina. A few men were in the building when it was attacked. All escaped except for one, Salah Aziz, the church attendant. A group of youths trying to extinguish embers from the fire discovered his body in a side room of the sanctuary that was used a baptismal, said the Rev. Mittias Ilias, head priest of the Virgin Mary Church.

Salafis have made a series of attacks and threats against Coptic Christians since the fall of the Hosni Mubarak regime on Feb. 11. The movement, some Copts said, is trying to incite violence between the Muslim majority and the Coptic minority, now estimated to be 7 to 10 percent of Egypt’s population of 83 million.