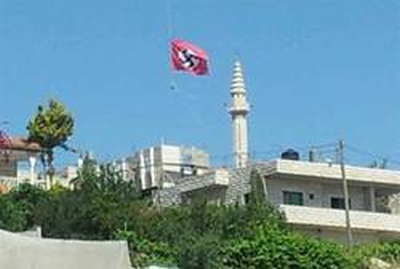 The twisted cross of National Socialism flew for all to see over a mosque Monday in the West Bank, according to the Israel National News Service.

In the predominantly Arab-Muslim town of Beit Omar, the large, black swastika that once symbolized Adolph Hitler’s Third Reich was clearly visible to astonished Israelis living in the southern suburbs of Jerusalem.

“I felt we were going back 75 years, losing our hold on the land,” said Uri Arnon. “The Arabs no longer feel the need to hide their murderous tendencies (by) announcing out loud that they wish to annihilate us.”

As the flag was affixed to a live electrical line, technicians were tasked to safely remove it.

The connection between Nazism and Islamism goes back to the Second World War when the Grand Mufti of Jerusalem, Haji Amin al-Husaini, not only politically supported Hitler but helped Heinrich Himmler form several all-Muslim Waffen SS units; one such unit, the 13th SS Handzar Mountain Division, carried out ethnic cleansing operations in the Balkan Mountains in order to carve-out an autonomous Bosnian Muslim state.

Both Hitler and Himmler would eventually develop stratagems employing Islam to advance the geopolitical goals of the Third Reich; after all, Nazis and Muslims already shared a common “theology” of racial purity as well as a mutual hatred of the Jews.