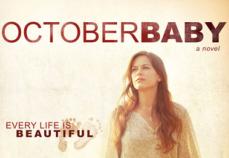 October Baby is the novelisation of the 2011 film of the same name. It is a fictitious account of how 19 year old Hannah finds out that not only is she adopted, but she is the survivor of a botched abortion.

Not surprisingly, she is somewhat shattered by this revelation, and also not surprisingly, determined to find and confront her biological mother. She does have this encounter after various twists and turns in the story plot but she is left even more hurt and angry than she was before. In her search she also meets the nurse who assisted in the botched abortion and subsequent birth, which had been a life transforming event for her. Further revelations by the nurse about the birth leave more questions to be answered by Hannah’s adoptive parents.

The theme of forgiveness, with its power for healing, is dealt with well in the final pages of the story. The story is also a romance, so it does of course have a ‘feel good’ ending all round.

Interestingly, the movie was a box office success but attracted poor reviews in secular media. Its subject matter attracted the inevitable controversy and the film was even labelled pro- life propaganda. Director Jon Erwin had not even known there were abortion survivors until he saw a YouTube video about Gianna Jesson which then inspired the October Baby story line. Gianna’s 17 year old mother was advised at an abortion clinic to have a late term saline abortion at 7 months, but instead of the expected still life birth, Gianna was born alive, although with cerebral palsy. Other mothers at the abortion clinic that had already been given injections and were waiting the birth of their dead babies witnessed this live birth and were faced with the full horror of the murder they were committing. It is against this kind of stark reality that we must assess the comment made by one of the film’s critics that “It’s a cinematic encapsulation of a worldview in which a woman’s rights are widely understood to be secondary to those of her offspring, both in the womb and years later.”

What is your world view on this issue? Certainly books (and films) such as October Baby bring to light the issue of abortion and can stimulate thought and debate.