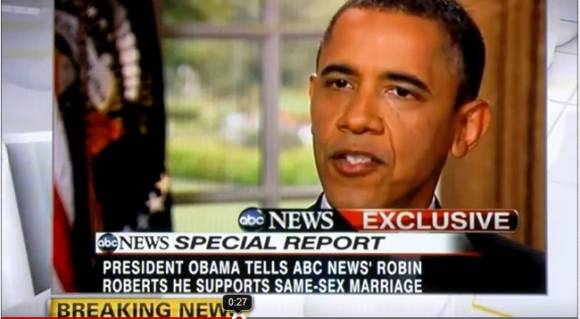 United States President Barrack Obama has announced that he now supports same-sex marriage, saying that his decision was based partly on his Christian faith and his belief in the Golden rule.

His decision to endorse the redefinition of marriage to include homosexual partners is a reversal of his longstanding opposition to gay marriage and follows growing pressure from the Democratic base and even his own vice president.

In making his announcement in an ABC Television interview yesterday, Obama became the first US President to openly support gay marriage. His stance is risky in a presidential election year. His likely Republican opponent, Mitt Romney, who is a Mormon officially opposes same-sex marriage. There has been mixed reaction to Obama’s announcement with strong support from liberals and the LGBT community, and opposition from the largest Christian denominations in the US as well as from pro-family groups.

“I’ve just concluded that for me personally, it is important for me to go ahead and affirm that I think same-sex couples should be able to get married,” Obama told ABC News reporter Robin Roberts in an interview .

He added that his wife, Michelle, agreed with him. “We’ve talked about it over the years and she, you know, she feels the same way,” he said.

He explained his foot-dragging reticence to support full same-sex “marriage” by saying he “was sensitive to the fact that, for a lot of people, the word marriage was something that evokes very powerful traditions – religious beliefs and so forth.”

However, Obama had previously implied the Bible supports homosexual unions. “I believe in civil unions that allow a same-sex couple to visit each other in a hospital or transfer property to each other,” he said in 2008.

“If people find that controversial, then I would just refer them to the Sermon on the Mount, which I think is, in my mind, for my faith, more central than an obscure passage in Romans.”

The president told the media his newly articulated position represents his private views, and that he believed each state should make its own decisions about marriage. However, he has publicly opposed state initiatives to define marriage as the union of a man and a woman in North Carolina and Minnesota. His remarks came one day after North Carolina amended its constitution to affirm marriage is the union of one man and one woman.

“Undermines cornerstone of society”
Leaders of the nation’s two largest Christian denominations have expressed distress and sadness at President Barack Obama’s about-turn on gay marriage. New York Cardinal Timothy Dolan, who heads the US  Conference of Catholic Bishops, said Obama’s remarks “undermine the institution of marriage, the very cornerstone of our society.” He added: “The people of this country, especially our children, deserve better.”

The Reverend Bryant Wright, president of the Southern Baptist Convention, predicted that voters will hold Obama accountable for what Wright calls “a calculated, politically expedient decision that completely ignores the biblical foundation of marriage.”

“It just makes me giddy with joy. I have been bouncing around all day,” said the Reverend Annie Steinberg-Behrman, a United Church of Christ pastor in Berkeley, California, who married her partner in 2004.

The Reverend Jane Spahr, a lesbian evangelist who has defied her Presbyterian Church by performing same-sex marriages, applauded the president.

“Because he understands oppression, he knows that loves is no second-class thing,” Spahr said from her San Francisco home.

The Reverend Curran Reichert, a pastor at Community Congregational Church of Tiburon-Belvedere in California who is married to her partner, praised the president for doing what she called his job.

Another gay pastor, the Reverend Scott Clark of the San Francisco Theological Seminary in San Anselmo, California, said it was uplifting for gay people to hear the message from the White House.

“It has taken him a while to get there,” he said, “but it is just deeply moving for me to hear the president of the United States finally acknowledge the full dignity and humanity of lesbian, gay, bisexual, and transgender people and our families.”

Pentecostal Pastor Charles Bargaineer of the largely black New Fellowship Church of God in the Orlando suburb of Winter Park, Florida, was troubled by Obama’s position, saying he may reconsider his support for the man he voted for in 2008.

“I don’t think that’s appropriate for the president,” Bargaineer said. “The Bible’s strictly against that.”

Regarding whether he would vote for Obama again this year, he said, “I’ll have to pray about that.”

The Family Research Council, which says it champions marriage and family as the foundation of civilization, called Obama’s position “disappointing but not surprising.”

“Romney … may have been handed the key to social conservative support by President Obama,” Perkins said.

Ilinois Family Institute Executive Director, David E Smith said : “Perhaps the most disturbing part of his (President Obama’s)announcement is how he frames the issue. Obama explains that ‘I’ve always been adamant that gay and lesbian Americans should be treated fairly and equally…’ Of course, all of us are for fair and equal treatment for every American — including those who self-identify as homosexual. But fairness and equality does not include legally elevating same-sex relationships to the same level of the God ordained institution of marriage. They are simply not equal.”

“And the notion that homosexual partners are somehow being denied the freedom to live as they wish, is absurd,” continued Smith. “Homosexuals have the liberty to have a relationship with any consenting adult (or adults) they wish. No one is stopping them. Taking these relationships into the public square demanding that we change public policy, create special laws, and change the very definition of marriage is intolerable.”

“Simply eliminating an entire gender from the picture and still calling it ‘marriage’ is not a mere redefinition of the institution, but rather the destruction of a core building block of society,” concludes Smith.

“President Obama has, in my view, shaken his fist at the same God who created and defined marriage,” Franklin Graham said in a statement on the Billy Graham Evangelistic Association website.