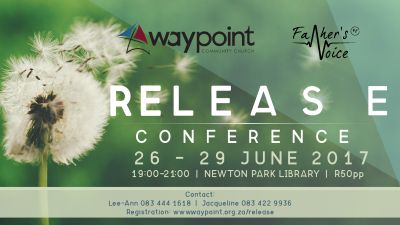 Believers in Port Elizabeth are invited to attend a week of impactful teaching at “Release Conference”which will be held at the Newton Park Library Auditorium from June 26 to June 30.

“We believe that Holy Spirit will minister in such a significant way that will move you to a new level and massively impact your life,” say conference hosts Waypoint Community Church.

The ministry team will be lead by Jacques Malan of Father’s Voice, from Cape Town and Johnny Louw an evangelists and speaker at various Mighty Men conferences.

Three members of the popular Cape Town based band “GLO” (pronounced ‘glow’) will lead praise and worship sections of Release Conference. They are lead by William Loedolff, who was responsible for writing the song, Dit is Gedoen which went to the top of the gospel charts within a few weeks in 2015. William’s brother Niel and good friend, Pierre Schoeman, make up the rest of the team.

The morning workshops will be in the coffee area of the DR Church Grasvoëlkop in Barbet Street, Cotswold Extension, from 9am to 11am.

All sessions are open to everybody and you can register online at www.Waypoint.org.za/release. The cost is R50 which covers all eight sessions. More information is available from Jacqueline Whittle at 083 422 9936 or jacqueline@waypoint.org.za,  or Lee-Ann Viljoen at 083 444 1618 or lee-ann@waypoint.org.za