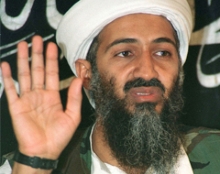 Osama bin Laden, the mastermind of the September 11, 2001, terror attacks that killed thousands of Americans, was killed by a small team of Americans who attacked his compound in Abbottabad, Pakistan, the United States, President Barack Obama said in a dramatic late night statement at the White House.

“A small team of Americans carried out the operation with extraordinary courage and capability.  No Americans were harmed.  They took care to avoid civilian casualties.  After a firefight, they killed Osama bin Laden and took custody of his body,” Obama said early today ( late on Sunday night – US time).

“Justice has been done,” the president said. Former President George W Bush, who was in office on the day of the attacks, issued a written statement hailing bin Laden’s death as a momentous achievement. “The fight against terror goes on, but tonight America has sent an unmistakable message: No matter how long it takes, justice will be done,” he said.

The announcement comes almost ten years after members of Al Qaeda hijacked airplanes and flew them into the World Trade Center in New York City and the Pentagon in Washington, DC.   Another hijacked airliner crashed in rural Pennsylvania.  Nearly 3,000 people died in the attacks.

Minutes after Obama made the announcement from the East Room, throngs of people gathered outside the White House and celebrated the news.

The attacks set off a chain of events that led the United States into wars in Afghanistan, and then Iraq, and America’s entire intelligence apparatus was overhauled to counter the threat of more terror attacks at home.

Al Qaeda was also blamed for the 1998 bombings of two US embassies in Africa that killed 231 people and the 2000 attack on the USS Cole that killed 17 American sailors in Yemen, as well as countless other plots, some successful and some foiled.

Here is some further reaction to Bin Laden’s death:
Head of the Hamas administration in the Gaza StripIsmail Haniyeh:
“We condemn the assassination and the killing of an Arab holy warrior. We ask God to offer him mercy with the true believers and the martyrs.” (Reuters)

Palestinian Prime Minister Salam Fayyad
“A major, mega landmark event marking the end of a person who clearly was involved in acts of terror and destruction.”(Reuters)

Spokesman for the Western-backed Palestinian Authority, Ghassan Khatib
“Getting rid of Mr bin Laden is good for the cause of peace worldwide but what counts is to overcome the discourse and the methods—the violent methods—that were created and encouraged by Mr bin Laden and others in the world.” (Reuters)
Afghan President Hamid Karzai
The American forces yesterday killed Osama Bin Laden and made him pay for his deeds, in Abbottabad city of Pakistan, close to Islamabad. He was made to pay for his actions. (BBC)

Pakistan foreign ministry
Osama Bin Laden’s death illustrates the resolve of the international community, including Pakistan, to fight and eliminate terrorism. It constitutes a major setback to terrorist organisations around the world. (BBC)

Former US President Bill Clinton
“This is a profoundly important moment not just for the families of those who lost their lives on 9/11 and in Al Qaeda’s other attacks, but for people all over the world who want to build a common future of peace, freedom, and co-operation for our children.”

Al Jazeera journalist Kamal Hyder
“He was considered by many as a hero, but not to the extent that people would come out on the streets. The reaction so far not likely to be strong on the streets, perhaps a protest here or there by the religious parties.”

New York city mayor Michael Bloomberg
“[Bin Laden’s death will] bring some closure and comfort to all those who lost loved ones.”

British Prime Minister David Cameron
“Osama bin Laden was responsible for the worst terrorist atrocities the world has seen – for 9/11 and for so many attacks, which have cost thousands of lives, many of them British. It is a great success that he has been found and will no longer be able to pursue his campaign of global terror. The news that Osama bin Laden is dead will bring great relief to people across the world.”

French President Nicolas Sarkozy
“The scourge of terrorism has suffered a historic defeat but it’s not the end of Al Qaeda.” (BBC)

Israeli premier’s office
“The state of Israel joins together in the joy of the American people after the liquidation of Bin Laden. Prime Minister Benjamin Netanyahu congratulates US President Barack Obama for this victory for justice, liberty and the common values of democratic nations which fought side by side against terrorism.”

Turkish President Abdullah Gul
“This shows that terrorists and terrorist group leaders in the end are caught whether dead or alive. The most dangerous and sophisticated terrorist organisation leader in the world being caught this way should be a lesson to everyone.” (BBC)

The Washington-based Council on American-Islamic Relations (CAIR)
“We join our fellow citizens in welcoming the announcement that Osama bin Laden has been eliminated as a threat to our nation and the world through the actions of American military personnel. As we have stated repeatedly since the 9/11 terror attacks, bin Laden never represented Muslims or Islam. In fact, in addition to the killing of thousands of Americans, he and Al-Qaeda caused the deaths of countless Muslims worldwide.” (AFP)

Kenya’s prime minister, Raila Odinga
“Kenyans are happy and thank the US people, the Pakistani people and everybody else who managed to kill Osama,” Raila Odinga told Reuters. “Mr. Osama’s death can only be positive for Kenya but we need to have a stable government in Somalia,” he said, referring to a four-year insurgency in neighboring Somalia where Al-Qaeda linked rebels are fighting to topple the government.