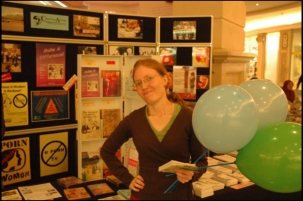 [notice]Africa Christian Action leader Dr Peter Hammond reports on recent Women’s Day outreaches that took place in Cape Town shopping malls despite initial opposition from mall mangers. As I read his newsletter report I wondered how many times we miss God-ordained opportunities to share the love and truth of Christ because the opposition looks too great and the words of discouragement seem so reasonable and convincing.[/notice]

On National Women’s Day, Frontline Fellowship joined Africa Christian Action in setting up displays in four shopping malls in Cape Town. 76 volunteers helped us to distribute over 17 000 gospel tracts and leaflets and nearly 2 000 balloons with Scriptures and pro-family messages on them. By God’s grace, during this 12 hour mission to the malls, we were able to counsel over 70 people and explain the way of salvation to them. Each person who was counseled through Way of the Master and Evangelism Explosion questions received a New Testament.

The shopping malls of today are like the town squares, market places and crossroads of the old towns and villages.

16 Years of Mall Ministry
This was the 16th year that our Africa Christian Action ministry has conducted outreaches in shopping malls on National Women’s Day. Initially, we received quite a lot of resistance and one after the other of the managers of various malls that we contacted gave a firm, No. Some specifically said that it was their policy to not have any religious organisation or display in their malls. One manager complained that as we had a Scripture verse on our ACA banner, they could not allow us to have a display in their shopping mall!

Discouragement
When we approached different pastors and church leaders to assist us in seeking to persuade the mall managements to reconsider their position, we received some extraordinary responses. One pastor declared: “God is plainly closing the door. We can no longer expect to be able to run such ministry displays in shopping malls!” He declared: “The days of putting on your red jacket and charging with bayonets is over! He advised us to rather go into the ‘digital marketplaces’.”

Digital Marketplaces
Well, I’ve never worn a red jacket and of course, we have been involved in the digital marketplaces for years. We are maintaining 12 websites and six different emailing lists. For 16 years we have been hosting Salt and Light, the longest running programme on a Christian community radio station in South Africa. We have also regularly participated in radio phone-in programmes on secular stations and we have participated in many national TV programme debates. We regularly write letters to the editors of newspapers and magazines. We are on Facebook and Twitter. We are in the digital market places. However, many thousands of people are walking in the shopping malls of our cities and the Scriptures command us to go into the highways and byways. “Wisdom calls aloud outside; she raises her voice in open squares. She cries out in chief concourses, at the openings of the gates of the city she speaks her word.” Proverbs 1:20-21. The shopping malls of today are like the town squares, market places and crossroads of the old towns and villages.

The Fruit of Perseverance
Thankfully, by God’s grace, despite such discouragements, we did persevere, ask, seek and knock. Finally we received permission to conduct our outreaches in four major shopping malls in Cape Town. As a result, many thousands of people were reached during this very full day of literature and balloon distribution, personal conversations, counseling and personal evangelism in the shopping malls. As on every other occasion, all my children were happily involved in blowing up balloons, handing out Gospel literature, and sharing the Gospel with shoppers in the malls.

Media Marketplaces
After packing up at Canal Walk, the largest shopping centre in Cape Town, I went on to Radio Tygerberg for our radio programme to deal with the problems of pornography, trafficking and prostitution and the Christian response. Throughout the day we spoke to many people who mentioned how much they appreciated our publications, the articles in JOY! Magazine, and that they were regular listeners of our Salt and Light radio programme every Tuesday night.