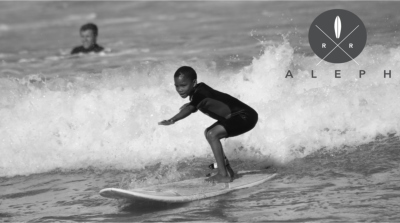 Street children and other youth at risk are encountering the Father heart of God and new life horizons through a unique surfing ministry at South Africa’s surfing capital — Jeffreys Bay.

Aleph Surf Foundation was established in 2007 through the conviction of a young man, Rehgert van Zyl, that street kids needed the intervention of loving spiritual fathers and role models in order to break the vicious cycle of poverty and brokeness in which they were trapped. He was also convinced that his passion for surfing provided a perfect vehicle for launching his vision. And indeed today, the joy of surfing and surfing “life lessons” are at the heart of Aleph’s pioneering programme that mixes surf coaching, life skills workshops with biblical values and mentorship.

But returning to the beginning, Rehgert, a young graduate with a year’s experience of working for a Christian organisation, believed that God was calling him to start with what he had, which was two surfboards, a couple of wetsuits and a rented house at Herold’s Bay, a coastal village near the Garden Route city of George. His parents, who lived in Herold’s Bay, believed in his vision and they spent much time praying through it with him.

“I started building relationships with kids in the township and then took them surfing. I told them I can’t give you a new house but I can give you the tools to break the cycle of poverty.”

And so Rehgert began to develop a curriculum incorporating Biblical truth and practical lifeskills built around lessons learnt through surfing. Mastering surfing was all about learning to overcome challenges, and so it was a fitting training analogy. Surfing also proved to be a powerful icebreaker.

“Surfing goes beyond race or class. In the water everybody is on equal ground. And there is something very non-threatening about it. You can approach a kid and say: ‘Hey, do you want to go to the beach and go surfing with me and see what it is about? So instead of just walking into a kid’s life and telling him that he needs to do this and that you can earn his trust. He trusts you when you take him into the water and then he can start to trust you with more’, ” says Rehgert.

“It is amazing to see a kid who was not even able to swim when we started, now stand up on a board. He is no longer  just another kid in the township. Now he has an identity — he surfs!”

He said that when he stated Aleph he supported himself by waitering and giving private surf lessons. He used most of the money to buy more surfing gear for the ministry.  “Because if you are not willing to invest in your own vision, how can you expect others to invest in it.”

Rehgert said that God provided miraculously for the ministry in 2008, when the George Town Council provided funding of R100 000 for the project, which he was busy registering as a non profit organisation.

2008 was a great year for Aleph — his bother and a friend from Holland assisted him, they rented a house in George which they ran as a youth centre, and they bought a kombi.

But in 2009 the going got rough. The funding was not renewed, they had to give up the youth house, and the police confiscated the kombi which turned out to be a stolen vehicle. It was a time of much soul searching. Encouraged by an unexpected prophetic word to worship God in the midst of hardships, he decided that the whole process was to “check my heart”.

“I decided that this (Aleph) is a vision I want to pursue until I audibly hear God say: ‘Stop. Now it is finished.”

The year ended on a more positive note when he raised funds to visit the United States to speak at  Christain surfers’ events. There he met Vanessa, a young American woman with a heart for ministry in Africa. She had already been on mission to Rwanda and Uganda and was passionate about fashion, job creation and micro business development.

“I felt that God was shifting pieces together. It was amazing. We both felt that we were using our gifts and passions for God to bless others.”

Eight months later they were married and living in Jeffreys Bay, where God had opened an exciting new partnership opportunity with Christian Surfers Africa. Aleph has linked up with various ministries in the town who work with children at risk, taking small groups of children through a three months surfing and discipleship curriculum. Christian Surfers International interns from various nations participate in the ministry, which is  constantly evolving. Involvement with children has led to involvement with their parents and extended families. Vanessa has established Aleph Creatives which aims to use artistic talent to empower the poor. Rehgert is working on an extended curriculum to cater for young people who have completed the initial programme and who have potential to be leaders and role models in their communities. There are scholarship and job creation initiatives…

From the outset Rehgert has believed that the programme that Aleph has pioneered should be replicated in other centres where there are children caught up in poverty and hopelessness. While he has used surfing as a vehicle for discipleship, he says the curriculum he has developed is universal and can be used anywhere with minor practical or cultural tweaks and does not depend on a surfing environment. He invites anybody who has a passion to uplift children at risk to contact him.