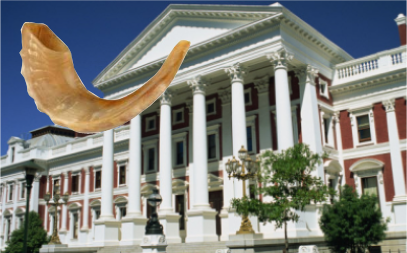 “We are contacting all churches, intercessors, prayer warriors, watchmen on the wall and prophets to come and join us,” says Helen Phillips, founder of Prayer Mushroom Ministry.

She says that “as a result of the tremendous power generated in our prayer in Parliament on the 8th May” a Gauteng couple, Esther and Daniel (not their real names as they wish to remain anonymous) were given a vision by God to urge the regular parliamentary prayer group to organise a meeting to “pray in unity for Cape Town, our communities and our country”.

Huge response wanted
“We want a huge response from praying people. Where there is unity God commands a blessing and we need and hunger for God’s blessing in Cape Town. There have been so many prophecies about the revival starting in Cape Town that we must usher it in with fervent, urgent prayer,” she says.

Describing the catalytic day of prayer in a committee room above the General Assembly on May 8, she says “Esther” and “Daniel” and Maditshaba Moloko of Cape Town, joined their regular group who pray in Parliament once a month with ACDP MP, Steve Swart.

“Because it was the day for discussing the Land Restitution Act in Parliament we were led to pray along those lines. It was amazing because there were 12 of us there representing all the nations involved in the land issue in South Africa. The whites, on behalf of the first settlers repented for taking the land away from the blacks and repented of the Masonic spirit they had brought into the country. They then prophetically gave the land back to the blacks. The blacks then repented from taking the land away from the Khoi-san and for the ancestor worship they brought in and they handed the land back to the Khoi. The Khoi accepted the land and in turn repented of the animism and foreign spirits they brought into the land. Then they handed the land back to the Lord.

“Engineered by God”
“Our land South Africa has been handed back to the Lord from the place of authority, the National Parliament. Steve Swart, Member of Parliament, was the representative of that authority. Unbeknown to us God had engineered the whole thing. Thank you Jesus,” says Phillips.

“We confessed and repented of corruption, dishonesty and greed in the government and the country and we called Christians to come in to Parliament and move in unity regardless of different political affiliations. We had three shofars and we blew them to the east, west, south and the north to call the Christians in. The noise was momentous and we felt the open portal as God responded to our prayer.”