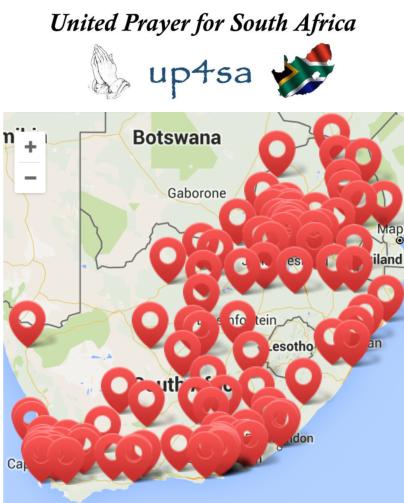 On February 28 at 14h00 Christians across the country will unite to pray for South Africa. This interdenominational hour of prayer about natural, political and spiritual issues is not only aimed at entreating the God of Abraham, Isaac and Jacob to heal our land, but also at re-igniting the flame of intercessory prayer in our nation.

Gateway News recently caught up with Robbie Black, the man God has tasked with the mammoth undertaking known as up4sa (United Prayer for South Africa). We posed the following questions:

GWN – Has the number of prayer coordinators increased? Any testimonies on that?
RB –  Almost 120 towns / communities have registered as prayer points at present [This is more than double the count when Gateway News reported on progress on January 14]. Jane, a prayer point co-ordinator from Hout Bay wrote the following:  “I was so thrilled this morning  to be able to show (at a small group) the picture (Venues map) on WhatsApp of what South Africa is beginning to look like. All the red bubbles.  But as I was looking at the red bubbles, I sensed South Africa washed in the blood of Christ as all those red markers join together to make it all red.”

GWN – What are the long term changes that you are hoping and praying will come about in the Body of Christ in SA as a result of this prayer day?
RB – Unity in the Body of Christ. It is such a blessing to know that different denominations, cultures and races will be kneeling shoulder to shoulder, praying for our country. I pray that the Lord will use up4sa to restore broken relationships in all spheres of Christian life. Where there is unity, the Lord commands a blessing! — Ps 133:1-3. I hope that the 28th of February will serve as a conduit for many people to connect with passionate and vibrant prayer groups in their community. Furthermore I pray that many Christians will start prayer groups in places where none presently exist; in schools, the workplace, government departments and many more! The up4sa website will be utiliSed as a resource centre where anyone will be able to retrieve valuable, and helpful, information on prayer.

GWN – Why specifically 28 February 2016? Is there any significance about the date?
RB – I just strongly felt the urgency at the beginning of this journey to have this day as soon as possible, but also allowing enough time for all the preparations and logistics oit would take to make this a truly nationwide event.

GWN – Are there any other specific scriptures that bear significance for this event? Will scripture be prayed?
RB – The scriptures previously mentioned were Hebrews 4:16, Acts 1:4 and 2 Chronicles 7:14. Ezekiel 22:30 stood out to me these last couple of weeks, “And I sought for a man among them, that should make up the hedge, and stand in the gap before me for the land, that I should not destroy it: but I found none.” I know that there have been such people in South Africa for many a year, and we are so blessed that this country has a multitude of intercessors. They are standing in the gap, they were found! So on the 28th of February we will put our strength together in a slightly different format, filling the gap even more.

GWN – How has your life and prayer life been changed as a result of following the call of God and coordinating this prayer event?
RB – The Lord has honestly opened my eyes anew to the importance and power of prayer. In connecting with so many prayer champions over the last few weeks I have learned much regarding prayer and intersession, and realised that we still have even more to learn. We have to realise what actually happens when we pray, for instance Ps 103:20 (KJV) “Bless the LORD, ye His angels, that excel in strength, that do His commandments, hearkening unto the voice of his word.” This scripture teaches us that as we pray the Word of God, angels act on the hearing of the word.

GWN – Is there anything else you can think of that will be of interest to our readers and/or motivate even more people to join in prayer?
RB – The call is to pray for South Africa! I pray that the Lord will birth a burden in our hearts to pray for our nation. Let us unite in prayer on the 28th, humbling ourselves in the sight of the Lord, trusting Him to intervene in a mighty way! Please visit the website to find the nearest prayer point in you vicinity [Click on the red markers on th Venue Map for more info about prayer points.] For those who would like to coordinate a prayer point, please contact us at admin@up4sa.co.za.

More details on the up4sa event can be found in our previous article, “Towns and Cities Uniting for Hour of Prayer for SA on February 28“.