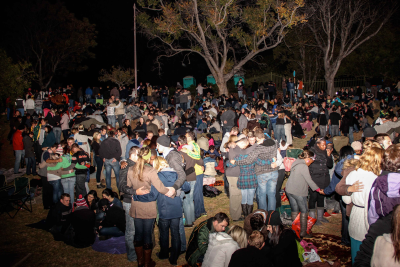 Christians throughout South Africa are intensifying prayer and worship initiatives in a bid to shift the spiritual atmosphere as the May 7 election draws closer.

In Pretoria, The Way, a broadly-based network of 200 youth leaders, has got the go-ahead to host #GAPnight2014, a multicultural prayer and praise event at the Union Buildings (@ SAPS Memorial) on the night before the elections. Some 2 000 young people are expected to attend.

“We want to make a statement that we CAN and WANT TO build the necessary bridges and cross the divides some deem impossible. We will pray towards a country where our differences aren’t a threat anymore, but is something to be celebrated – a country that can focus on what is important; the blessing of God on our people,” say the organisers.

The Way have been working together in this network for almost a decade. For the past few years they have presented “Bergbid/ Prayer on the Mount” at Fort Klapperkop, which has been very successful as a united effort.

The #GAPnight2014 evening will include cross-cultural praise and worship and the various prayer points will be lead by leaders from the different churches represented there.

In Cape Town worshipers will attend a Burn 24-7 event today (Friday, May 2) to worship and declare God’s governance over South Africa. The event will take place from 19:00 to 09:00 tomorrow at Bay Community Church, Muizenburg. (See Facebook page). 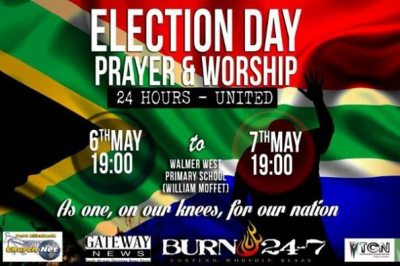 Port Elizabeth Christians will unite at a 24 hour Election Praise and Worship event over the election period: it will run continuously from 7pm on May 6 to 7pm on May 7 and is open to all.

“Besides uniting in casting our democratic vote for party and person, we are also uniting together to celebrate the freedom we have in Christ Jesus. We will celebrate the changes and growth in this city that we have been experiencing because of His love, grace and mercy and the positive changes that are still to happen. This irrespective of the negative publications and comments we sometimes read and hear about,” say the organisers — a group of individuals from various churches throughout the city.

One of the venues for the 24 hour Election Praise and Worship is the Walmer West Primary School, in William Moffet Expressway, just to the left of the robots between Fig Tree Spur and Maritime Motors. There will be tea, coffee, soup and hot dogs available to buy throughout the 24 hours.

The event is hosted by individuals from various churches throughout the city. They say they want to see the city united together, praying, praising and worshiping God without boundaries or city limits. They believe that God has united them for this purpose. This can be seen in the way events, over the past few years have just fallen into place, they say.

They also believe that God is birthing this same seed in other groups throughout the city and He is moving mightily through them as well.

More information is available from:

In Bloemfontein we have 7 days on the Wall from May 4 to 10, reports Hannelene Mostert. We are inviting believers all over town and surrounding areas to pray with us for the election, spiritual awakening, salvation of the lost and social justice. You can contact us at rosecity.prayermovement@gmail.com, she says.

SA prayer networks
Meanwhile, writing on behalf of various SA prayer networks, Daniel Brink reports that thousands of Christians across the nation have been engaging in focussed prayer for the National Elections over the last 80 days. With just days left before the election he urges every Christian Leader to encourage his/her followers to engage in intensified prayer and fasting for the country, from Monday, May 5 until Wednesday, May 7.

He says churches and prayer groups are called to consider the following strategy for the 3 days of fasting and prayer:

Some suggested guidelines to assist in providing focus for individuals or corporate prayer include the following key areas:

Various resources are available to help Christians pray strategically for the elections. These include the Jericho Walls Prayer Guide,  The SA Prayer Movement for Change Prayer Strategy Document, and a Prayer Guide from the Insitute of Christian Leadership Deveopment (ICLD).