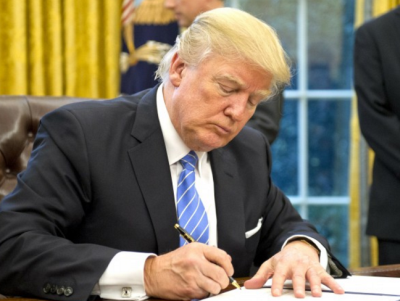 President Donald Trump, in one of his first executive orders, reissued and expanded the Mexico City Policy (MCP) which prevents foreign non-governmental organizations that perform or promote abortion from receiving funds from the population account of the US Agency for International Development (USAID) unless they pledge to stop performing or promoting abortion as a method of family planning, regardless of the funding source.

President Trump has directed the Secretary of State, in coordination with the Secretary of Health and Human Services, to, in the fullest extent allowed by law, “implement a plan to extend the requirements of the reinstated Memorandum to global health assistance furnished by all departments or agencies.”

The expansion to “all global health assistance furnished by all departments or agencies” reflects President Trump’s commitment to stop use of all US tax payer money for abortion, both in the US and abroad. This action is supported by an overwhelming 83% of Americans who do not want to have their tax dollars used to support abortion in other countries according to a new Marist Poll.

The modernisation of the policy also reflects the reality that a number of organisations working in the health field, especially maternal, reproductive and sexual health, have become the greatest proponents of abortion. MCP will support the work of life-affirming organisations that seek to save the lives of both mother and child and do not consider the child “expendable”.

He continues: “Without this protection in place, foreign NGOs receiving US government funds promote and perform abortion throughout the world with the imprimatur of the United States”. Smith explains that these NGOs “also set up additional projects overseas seeking to topple pro-life laws, imposing a new colonialism that fails to respect life-affirming cultures.”

Senator Lee stated: “The resolution is a Congressional support document, rooted in legislative and executive history, representing the will of the majority of Americans to see more restrictions on funding for abortion — restrictions President Trump can immediately impose — applied to our foreign aid expenditures of taxpayer dollars.”

Senator Ben Sasse explained his concern: “Americans are humanitarians and the Mexico City Policy reflects our heartfelt compassion for both moms and babies. Nebraskans, including many families who donate to charities that heal and comfort around the world, shouldn’t be forced to export abortions with their tax dollars. We want to support Good Samaritans, not global abortion providers.”

The two giants of the international abortion industry most affected by the pro-life policy –International Planned Parenthood Federation (IPPF) and Marie Stopes International (MSI) –have been defunded in the past and again state that they refuse to comply and will not divest themselves from their abortion activities thereby making themselves ineligible for US funding.

Additionally, the memorandum also directs the Secretary of State “to take all necessary actions, to the extent permitted by law, to ensure that US taxpayer dollars do not fund organisations or programs that support or participate in the management of a programme of coercive abortion or involuntary sterilization.”

UNFPA has long been criticized for complicity with China’s population control programme that routinely employs coerced abortion and forced sterilisation to force compliance. The UNFPA website for China includes a number of reports on its work and funding including on integrated sexual and reproductive health.

PNCI says it extends its sincere thanks to Trump and his administration for the reissued and modernized Mexico City Policy.

“We believe that the new policy is a giant step toward reversing the elitist view of the former administration and its allies that abortion of children in developing countries is an acceptable solution to poverty and a component of sustainable development,” it says.