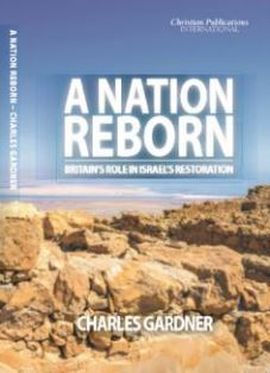 Britain’s role — both positive and negative — in the miraculous rebirth of modern Israel, is the focus of A Nation Reborn, a timely new book,  by Cape Town-born, British-based journalist and author Charles Gardner.

Released as the resurrected nation celebrates its 70th anniversary amidst the threat of war, the book squarely addresses what has become a political “hot potato” without flinching from controversy, arguing strongly for Israel’s legitimacy in the face of rising anti-Semitism, say the publishers, Christian Publishers International.

Easy to read and understand, the narrative flows seamlessly through 28 inspirational chapters from
background to the Balfour Declaration to powerful testimonies of Jews and Arabs who have found both
reconciliation and peace through the Jewish Messiah, Jesus Christ.

With a 44-year career in journalism behind him, Charles, who is a frequent contributor to Gateway News, writes passionately and fluently as he tackles, from a political and biblical perspective, a subject hardly ever out of the news.

As Israel takes centre stage in world affairs, this is a must-read for all who want to understand what her restoration means in the light of God’s eternal Word, say the publishers.

Describing the book as “magnificent”, fellow journalist Christopher Proudlove comments: “It is a most
important work which deserves to be widely read and is top of my list for anyone wanting to know about Israel.”