Prophetic artist Bernadine Munn sent Gateway News a photo (see below) of a recent painting she did for South Africa which was inspired by a vision she had while listening to a new sound being released over the nation by prophetic drummer Jane Lawther (Click on audio player below painting to hear the drumming).

Bernadine, who heads up the Prophetic Arts Ministry at Central Parks Church in Craig hall Johannesburg says the vision is a “now encouragement” for SA. She explains the vision below. 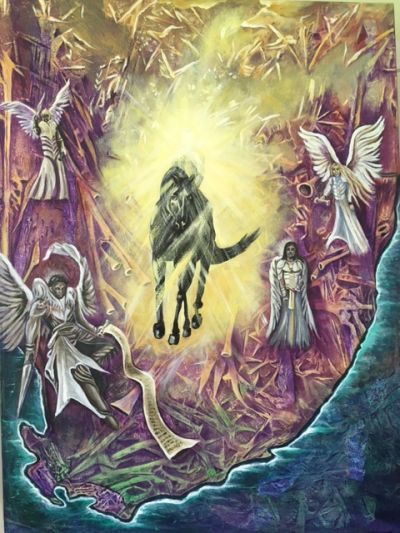 Explanation : VISION – A NEW SOUND IS RELEASED OVER SOUTH AFRICA…

In the vision there was so much movement, coming in waves. Strategic movement, with angels being released in battalions into specific positions and locations over South Africa. The angels in charge of the battalions had scrolls, which they unrolled over those locations at specific times and commands and trumpets blasts. I had a deep sense of them being POSITIONED and made ready and ALERT to SPECIFIC TIMINGS to release SPECIFIC THINGS that God is orchestrating over SA now. THIS IS A NEW THING. It has been kept for such a time as this. A huge horse carrying a majestic rider stepped along a pathway made by angels over our nation. I don’t know who he is but he commanded great honour and respect. The Kingdom of God is coming to SA!

I believe God is hearing the prayers of the saints in SA and is responding. Please Don’t stop praying!!! There is so much more of God’s Kingdom that needs to be manifested in our land. But here is the encouragement, God is on the move to bring HIS PLAN to this nation! And we get to partner with Him in doing so through prayer and prophetic action.

Bernadine says she had a number of requests to buy the painting during the Recent Kingdom Come SA conference where she completed it during worship, but does not want to sell it, as it is a word for the nation. However, prints, to order, in different sizes, priced accordingly, are available to individuals, churches, groups etc, together with a recording of the new sound drumming. Bernadine can be contacted at bernadine.munn@gmail.com.