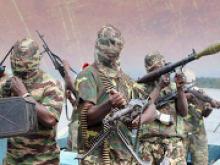 Islamist militants of Nigeria’s Boko Haram movement, linked to al-Qaida’s North African branch, this week attacked a Nigerian air force base in the insurgency-wracked north in one of their biggest and most audacious attacks, underlining how Africa seems to be the new battleground for the jihadists.

Elsewhere on the continent, al-Qaida affiliate al-Shabaab has been striking across Somalia and East Africa despite recent military setbacks.

Algeria, Libya and their neighbors in North Africa are having to confront heavily armed al-Qaida jihadists while Egypt is facing off against a growing jihadist alliance based in the Sinai Peninsula.

There’s no evidence so far that this is linked to al-Qaida. But the sectarian nature of the bloodletting points to the spread of Islamist militancy that has been moving southward from the Mediterranean littoral and westward from Somalia over the last couple of years.

There have been sectarian clashes and assassinations on the Indian Ocean island of Zanzibar off East Africa, once a major Arab slavery center, in recent months.

U.N. peacekeeping forces in Africa warned in November that after helping the Congolese government crush the 20-month M23 rebellion they are now focusing on tackling a group called the Allied Democratic Forces, consisting of 1,200-1,400 Islamist militants, including Arabs, who have kidnapped at least 300 people over the last year.

The group’s been around since the 1990s. But it’s the only group in the war-torn, mineral-rich Democratic Republic of Congo that’s considered to be Islamist.

The 3 000-strong U.N. Intervention Brigade observes that the ADF is considered “the hardest nut of crack” of the armed groups still active in the region.

The group’s ideology and objectives remain unclear, but the U.N. stressed: “We cannot allow this group to continue unscathed. The potential threat they represent is too great.”

The Ugandan government claims the ADF is allied to Somalia’s al-Shabaab, now controlled by transnational jihadists who seek an Islamic caliphate in Africa and have strong ideological and paramilitary links to al-Qaida, particularly the movement’s highly active arm in nearby Yemen.

Significant shift
Friday’s attack by Boko Haram — “Western education is a sin” in the Hausa language of northeastern Nigeria — on the international airport in Maiduguri, where the local air base is located, marked a significant shift in target for the group, which took up arms six years ago.

The group, which seeks an Islamic state in Africa’s most populous country, has until now hit churches, schools, government buildings and small military posts in its escalating insurgency.

Some 300 fighters were hurled against against the sizable military garrison at the airport outside Maiduguri, capital of northeastern Borno state that’s been the cockpit of Boko Haram’s insurgency in which more than 5,000 people, many of them Christians, have reportedly been slaughtered in tit-for-tat massacres.

The Islamists destroyed three military aircraft and two helicopters during a five-hour battle, but failed to torch the airport. The army says more than 100 attackers were killed. Twenty military personnel were reported slain.

The Long War Journal, which monitors global terrorism, reported that the attack “was reminiscent of others by al-Qaida’s allies on bases in other theaters of war.”

These include the Afghan Taliban’s attack on the US Camp Bastion in September 2012 in which six Harrier jets were destroyed.

In May 2011, the Pakistani Taliban blew up two US-built P-3C Orion maritime reconnaissance planes in a raid on a Pakistani Naval Station outside Karachi. They were only overcome after a 17-hour battle.

Attacks on such high-value targets such as these are designed to score major psychological points by demonstrating that powerful state institutions can be humbled.

There are echoes here of the January attack by 40 fighters of an al-Qaida group led by veteran Algerian jihadist Mokhtar Belmokhtar, who fought in Afghanistan, on the In Amenas natural gas complex in southeastern Algeria.

Algerian troops stormed the complex after a four-day siege, killing most of the attackers and 39 foreign technicians, but the impact and scale of the attack sent shudders through the energy industry across the region.

All these groups appear to be displaying greater tactical skills and attacking important targets, a worrying trend.