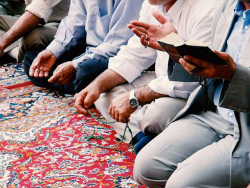 Church’s across the world are participating in an annual 30 days of prayer for the Muslim world reports CBN.

It began on June 6, coinciding with Ramadan, an important month of fasting and religious observance for Muslims.

The 30 days of prayer for the Muslim world is an international movement that began in 1993. Christians worldwide are called to make an intentional and respectful effort during that period to learn about, pray for and reach out to Muslim neighbors.

In many churches, prayer booklets from WorldChristian.com are distributed to help Christians understand what they’re praying for and to guide them through the month.

“This (30 Days) has been such a blessing to me and has opened my eyes to what God is doing and wants to do in the Muslim world. I’d like to see more testimonies of how people have come to Christ,” said one participant.

South African prayer guide
In South Africa a prayer guide for 30 days of prayer for the Muslim world has been compiled by various missionary organisations through Christian Concern for Muslims (CCM). More information about the international movement is available here.