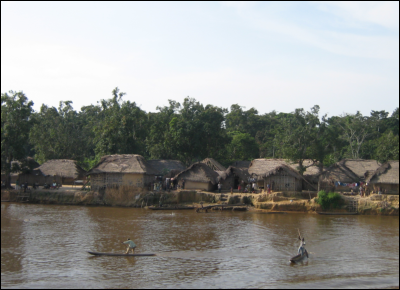 Although the 10 000 kilometre 4×4 Africa Peace and Development Expedition from Cape Town to Kisangani during August and September 2014 by faith-based social entrepreneur Johan Meintjes, by his own admission, did not achieve all he set out to, it has given him a deeper insight into the desperate need for both spiritual and economic upliftment in rural Africa.

Meintjes says from what he saw, the African Renaissance is a theoretical presumption that might be taking place in the media and boardrooms of African capitals, but in the rural areas through which he travelled it is practically not evident.

Meintjes was unable to complete the entire journey to promote a north-south road through the centre of the Southern African Development Community (SADC), between Cape Town and Kisangani for the sake of community development and discipleship in Christian ministry. Of the planned 10 000 kilometre-route he completed 8 761 kilometres from South Africa via Zimbabwe, Zambia, Tanzania, Burundi, the eastern part of the Democratic Republic of the Congo (DRC), Rwanda, Malawi and the northern sector of Mozambique.

Widescale banditry
Meintjes reports that the road from Cape Town to Kisangani is not open beyond Bukavu in the DRC, for normal travel or mutually encouraging Christian interaction, because of widescale banditry.

Having discovered that the Lake Tanganyika ferry, the MV Liemba was out of action, and that the road between Kalemie and Bukavu was not open, Meintjes detoured along the Tanzania and Burundi side of Lake Tanganyika, to Bukavu.

“At Bukavu I learned that the road to Kisangani via Walikale, Lubutu and Wanie Rakula was not passable either, and was also often beset by bandits and rebels.

“Confirmed advice was to hire a guide and armed soldiers, pass to Goma and Beni via Rwanda and Uganda, and use a somewhat ill-maintained road from Beni to Kisangani.”

“However, with uncertainties around the price and availability of fuel, along with the need to traverse up to 48 roadblocks demanding as much as US$25 each, I could not undertake the rest of the trip in good conscience.

“While principalities of darkness and agents of iniquity isolate and exploit those regions, I did not deem it prudent or a commendable Christian action to continue.

“The people of the regions north of Lubumbashi, and around Kalemie, Uvira, Bukavu and Kisangani have a marked frustration, stress and desperation as they try to survive without passing trade and general developmental interaction in their area.

“It was often related to me that people in the Eastern DRC do not start small businesses or agricultural activities as they are often harassed, taxed, disenfranchised and prevented by rebels, mineral wars and instability,” says Meintjes.

Although his most vivid overall memories of the trip was of rumble strips, speed bumps, road blocks, and bureaucracy, Meintjes is highly appreciative of the joy he experienced at the mission stations he was able to visit, and the new groundwork for agricultural and local economic initiatives that he could investigate along the 8 761 kilometre development outreach.

Encouraging
He says he was encouraged by the economic and infrastructure developments in Zambia, Rwanda and Tanzania for growing the primary and local economies.

“While Burundi, the Eastern DRC and Malawi were not as dynamic, the development potential is there, despite the apparent deterioration and neglect.

“Not enough was seen of Mozambique (via Tete) to validate general comments relating to economic prosperity or development in that area.

“Zimbabwe remained very disappointing in appearances and in a general lack of visible economic development.”

“However, Zambia, besides South Africa, was the most vibrant in clearly visible agricultural, commercial and industrial activity, but this was regretfully offset by complications and petty corruption relating to border customs.”

Meintjes says there is much evidence of Chinese projects in the form of road building, accommodation areas and mining projects. However, various projects funded by OPEC, Japan, the Netherlands and others are also apparent, and do contribute to regional development in the southern Africa region.

“Africa certainly is not entirely idle. Many people visibly enjoy working, and take a sense of pride in their responsibility, but sadly, many local, rural and tribal co-operatives are reported to fail due to tribalism, nepotism, greed and self-centred actions by some of the members. Furthermore, government facilitation of procedure and markets often seem to be inadequate, thereby discouraging efforts.

“On the positive side new agricultural co-operative and trust models are being developed in Zimbabwe, Malawi and Tanzania.”

Meintjes says the most striking need is for the development balance between cities and rural regions in Africa to be more carefully considered, both in economics and ministry, especially with regards to contextual teaching and the practical application of Christian responsibility and good stewardship.

“The need for a dynamic Church and a bottom-up developmental economy for the bottom billion in the African continent was mentioned spontaneously at grassroots level in all of the eight Southern-Africa countries I visited; for these are the dwelling places of many of the poor, downtrodden, largely forgotten, lowly and humble.”

Mission stations
Meintjes says despite the dire need for more practical evangelism and teaching of what Jesus said in Matthew 28:20 (teaching them to observe all things that I have commanded you) to those with an ear to hear and a heart for God in Africa, his personal and humble observation is that Christian mission stations play an important stabilising and educational role in the regions where they operate.

“A warm welcome and accommodation was to be found at missions of Moravian, Roman Catholic, Reformed, Operation Mobilization and Seventh Day Adventist origin.”

“It is urgently submitted that the Church cannot continue to ignore such deeds and allow such unrighteousness to continue perpetually, as such exploitation has existed for many years to date, without the Church speaking out against it in a strong voice, like a trumpet.

“The people and potential of Africa is vast, but while not at all denying the good that comes from Church and missions, more can and must be done in practice to salt, light and yeast the Kingdom of God in Africa.

“Currently an enterprise supported by Mission without Borders is being investigated in Malawi with the aim to spread practical Good News and the Christian faith in action in the sustainable development methods of rural agriculture, commercial co-operatives, the stimulation of local tourism, and a God-honouring environment that bears practical fruit in the daily life and work of adherents.

“For too long a dualism has existed between our faith and our deeds – especially in Africa,” says Meintjes.

For more information Meintjes can be contacted at e-mail: esprojects@swissmail.org or telephone 082 443 5685.