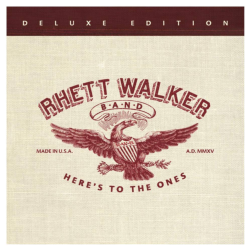 Rhett Walker Band burst onto the scene two years ago with their hit single ‘When Mercy Found Me’, and were no sooner drawing comparisons with the likes of Third Day and NEEDTOBREATHE. With a debut album so impressive it could have passed for a greatest hits collection, the pressure to deliver a sophomore effort as good, or better, than 2012’s ‘Come To The River’ must have weighed heavily on the shoulders of Rhett and his bandmates as they headed into the studio.

In an attempt to broaden their appeal to an audience beyond the CCM crowd, album number two sees Rhett Walker Band going for a more ‘Country-fied’ sound than their usual Southern Rock style, as well as introducing some secular themes. It does not always work in their favour, but the good songs are very good, and the great ones, exceptional.

After ominous opener “Clone”, and the anthemic patriotism of the title track (whose proudly ‘red, white and blue’ lyrics non-Americans may find difficult to relate to) comes what is arguably the album’s centrepiece: “Love Like Jesus”. Rhett, in his distinctive Southern drawl, urges us over a rousingly beautiful chorus to live our lives emulating the love of the Saviour, who gave the imperative to “Love one another, as I have loved you” (John 13:34).

In addition to “Love Like Jesus”, numerous other highlights abound. “The Mystery” is an incredibly raw acoustic recording which prompts us to think about how the Lord cares more for pure expressions of faith which emanate from the heart (such as giving to the poor), and less for external signs of piety like wearing “a golden cross around your neck”. “The Other Side” is a traditional, piano-based Gospel cut which joyfully proclaims that the meaning of life is to be found if you “seek first the kingdom of God.” (Matt 6:30).

A vital reminder to slow down and take time to be filled with wonder at God’s grace comes in the form of the catchy mid-tempo number “Amazed”; and “Broken Man” is a moving expression of thanks to a God whose mercy and forgiveness for sinners runs irrevocably deep. Elsewhere, the frontman’s soaring vocals on “Welcome Home” encourages one to look to the day when the pilgrim who entered in through the narrow gate will stand glorified with Christ in heaven, hearing the Master say: “Well done, good and faithful servant.” (Matt 25:21). “Here’s To The Ones” is patchy in places and the Deluxe Edition (which is the edition available in South Africa) could have benefitted from its unwieldy tracklist being tidied up to make one definitive version of the album, retaining only the best songs of the crop. The unremarkable ballad “Better Part of Me” and a lacklustre live performance of “Gonna Be Alright” are just two of a handful of songs which could easily have been omitted.

While not surpassing their debut, “Here’s To The Ones” is anything but disappointing, and the boys from Nashville can pride themselves on a laudable effort which, in all its grittiness and eccentricity, succeeds in glorifying God and pleasing fans both old and new