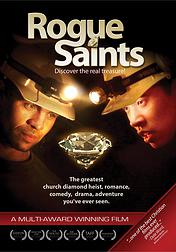 The multi-award winning inspirational comedy, Rogue Saints, will be released at selected Ster-Kinekor cinemas across the country on October 11.

The 103-minute feature film is the only faith-based comedy set to be released on the big screen for 2013, said Pieter Pohl, Managing Director of Innovation Films which is releasing the movie.

‘Rogue Saints’ is a roller coaster of drama, comedy, adventure and romance that ultimately leads to the discovery of a whole different kind of treasure.

Billed as a roller coaster of drama, comedy, adventure and romance that ultimately leads to the discovery of a whole different kind of treasure, Rogue Saints marks the directorial debut of Adam Lubanski, who has served as the interactive graphic designer for films such as ‘The Amazing Spider-Man’ and ‘Charlie’s Angels’.

“We’re really excited to be releasing Rogue Saints,” said Lubanski , “The message about God’s community is very close to my heart and has really resonated with the churches and people that have seen it. It’s a fun, engaging story that makes people laugh too.”

“We are deeply honored to have been chosen for ‘Best U.S. Narrative Feature’ from a field of over 100 great Christian films at the prestigious 2012 San Diego Christian Film Festival! “ said Lubanski.

‘Rogue Saints’ is the story of what ensues when Nick and Dylan, two men down on their luck, set out to steal an enormous diamond buried in the basement of a church. In an attempt to disguise their endeavor, they slyly volunteer at the church, but something about the church and its members begins to affect them.

‘Rogue Saints’ won the ‘Taff Family Award’ at the 2012 Attic Film Festival, which gives recognition to the best in Christian Independent Films. It is also an Official Selection at the Gideon Film Festival, Projecting Hope, The Indie Festival, and Kingdom Wood.

More information and cinema listings are available at www.roguesaintsmovie.co.za.