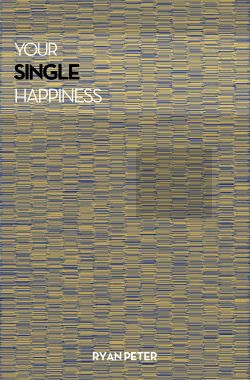 Can we be happy when we’re single? Ryan Peter looks to answer this question in his new book, Your Single Happiness, which released on  Friday, February 13, 2015.

In 2004, writer and journalist Ryan Peter was tired of “having tried everything” and still being single. This, coupled with what he calls idealistic and legalistic views of dating in the church, only served to make him more confused about God and his own self-worth.

“For most of my life I battled with self-worth issues, while being absolutely fascinated with girls and romance. This never created a very good mix, as I always felt I was never good enough for anyone. By the time my dreams and hopes of being married at the age of 24 had been shattered too many times, I was over it,” he says. “Over-idealistic views in the church, such as you shouldn’t date unless you know – and really know – you’re going to marry that person, never worked, despite all the promises from those who taught it. I had bought into these views but, after all the hurt, I decided it was time to find out for myself what the Bible really says.”

God took Peter on a very personal journey that changed his approach to his relationship with Him, and his life. One result of that was a book he wrote, called Single. Peter self-published the book and only printed a few copies.

“I know of a couple who actually attribute the book for being a catalyst for them getting married! Many other singles found the book incredibly helpful, challenging, and refreshing,” says Peter. “Many shared my thoughts: that most Christian books on singleness only cover principles and guidelines for dating, or use the Bible loosely to prove a particular teaching. This is still the same today. There’s very little that goes to the heart of the matter, dealing only with outward behaviour instead of really asking hard questions about God, ourselves, and romance itself.”

After 10 years and constant requests for the book, Peter has revised it, dealing with what he calls the “verboseness” of the original while retaining its original thoughts. The result is Your Single Happiness.

“Too many books on singleness are written by married people. I wrote mine when I was still single. I wanted to retain the core message of the book, but say it in a way that’s more comprehensive and to-the-point,” he says.

Can we be happy when we’re single? How much is marriage our decision and our effort, and how much do we leave up to God to decide? And what the heck do we do about staying pure? Your Single Happiness looks to answer these questions and more.

“I feel the book is highly relevant for single people today, especially because of the very positive feedback I receive from those who have read it. Your Single Happiness is the book I was looking for when I was single, and I believe it is the book many others are also looking for today,” says Peter.

Your Single Happiness is available directly from Peter’s website, ryanpeterwrites.com.