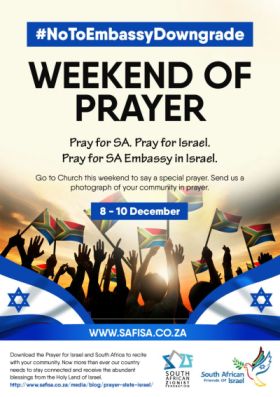 The Jewish community of South Africa, through South African Friends of Israel, has called on Christians to pray this weekend for South Africa, Israel and the South African Embassy in Tel Aviv which is under threat of a downgrade to a liaison office.

A resolution by the ANC policy conference in July to downgrade the embassy will be debated at the party’s national conference which begins on December 16 and South African Jewish citizens fear that it will be they and not Israel who will be punished if the resolution is adopted.

Teri Levin of the SA Zionist Federation says they are reaching out to Christian communities, calling for a peaceful weekend of prayer from December 8 to 10, at local churches.

“We have a large number of churches who are already on board, such as Nazareth Baptist Church, Hope of Glory Church, City of Mercy Tabernacle and lots more,” she says in an email to Gateway News.

A special prayer which Christians are asked to pray can be downloaded from the SA Friends of Israel website at http://www.safisa.co.za/media/blog/prayer-state-israel/

Huffington Post reports that in a policy briefing at Luthuli House on Wednesday, deputy minister of public service and administration Dipuo Bertha Letsatsi-Duba –– who serves on the ANC national executive committee’s sub-committee on international relations –– said an assessment was being conducted on the implications of the embassy downgrade decision.

Gateway News asked three Christian leaders who have extensive experience of Israel to comment on the implications. Cheryllyn Dudley ACDP MP and member of the parliamentary Portfolio Committee on International Relations and Cooperation, and Apostle Linda Gobodo founder of Vuka Africa Foundation, responded by providing recent statements they have made on the topic. Pastor Oluegun Olenipekun president of the Institute of Christian Leadership Development drafted a written report for us.

Below are brief extracts from the three leaders’ reports. You can read their full reports here.

It would also put an end to the South African government’s potential of playing an important role in bringing about peace between warring parties, she said.

She also said it would jeopardise trade opportunities that could promote economic growth and employment, and would violate the business rights of South Africans who trade with Israel.

She also spelled out negative educational and cultural, geopolitical, constitutional and security consequences.

“Effectively this action, although called for in order to place pressure on the Israelis to negotiate a sustainable peace with their Palestinian counterparts, would instead restrict and vilify Jewish and Christian South Africans, as well as many others, for their legitimate religious, cultural, and business association with Israel,” Dudley said.

Linda Gobodo said she has over the years been involved with other ministries making pilgrimages to Israel where the Bible comes alive. Downgrading the embassy would have a very negative effect on South Africans wanting to visit the Holy Land — especially if Israel reciprocated.

The embassy move would also cut South Africa off from benefiting from valuable skills and resources that Israel is willing to share in fields such as agriculture, water management, medical innovation and hi-tech.

‘There will be an upgrade’
However, South Africa could take heart because godly government would come according to prophecy, and SA would return to Israel and have good relations, and instead of a downgrade there would be an upgrade.

Olusegun Olenipekun said South Africa was out of step with advanced economies of the world, including America, Japan, India, and Saudi Arabia, who were strengthening diplomatic ties with Israel — and with many African countries, including Egypt, Kenya, Togo, and Rwanda, who were increasing trade relations with Israel.

He writes: “What culture is going to prevail in South Africa in the near future depends on who South Africa befriends in its international relations. Israel shares the culture of productivity, innovation, excellence, and entrepreneurship. If we neglect what Israel offers in this area we may be opening the door to terrorism, barbarism, incessant riots and unproductivity that is associated with the enemies of Israel. Which side is South Africa?”

He continues: “Israel has been a beacon of light to all former colonised territories of the world. Israel has succeeded to reverse two thousand years of colonialism by regaining her land and restoring the use of Hebrew language. This is motivating for African countries who are seeking for the restoration of our identity in the post-colonial era. Why does it appear as if the ANC is castigating Israel for her courage to reverse colonialism?

Political suicide
“If the ANC goes ahead with the downgrade of the Israeli embassy, it will be committing political suicide. It will be the gravest policy mistake that the oldest political party on the African continent would have committed and it would be too late for the party by the time it realises its mistake.”

He also pointed out that many Christians and business travellers to Israel who went there without visas may require them if the embassy downgrade was implemented. And the ANC would lose the opportunity to be an arbiter in the conflict in Israel.