The River Group has opened its hearts and pockets to give South African pastors an opportunity to be equipped in healing ministry at a conference addressed by the leader of the largest Hispanic Church in the United States.

More than 230 pastors and spiritual leaders have accepted the special invitation to attend pastors’ sessions on the closing nights of the annual Days of Glory Conference at River Park, East London on Tuesday July 26 and Wednesday July 27. And the River Group is footing the bill for more than 200 of them, it says in a press release issued today.

Apostle Guilermo Maldonado of King Jesus International Ministry has been preaching nightly at the conference since Sunday, July 17 and numerous healings and testimonies of miracles have taken place in this time, says the press release.

Maldonado, whose Miami-based church’s attendance grew from just 12 in 1996 to its current 15 000 to 20 000 people weekly, will equip and teach pastors in the anointing and gifting of healing. According to the press release, Maldonado, who has an MA in practical theology and doctorate in divinity from Oral Roberts University, is committed to encouraging leaders to become true spiritual fathers capable of leaving a legacy of blessings to future generations. He was invited to minister in East London by River Ministries leader Dr André Roebert after they met in the US some time ago.

The press release says that the cold, wet, rainy conditions in East London since Sunday have not deterred thousands of expectant people from attending the conference — and many have received their miracles. Each night attendance has increased with 1 300 people being the highest.

Since the start of the conference 6 842 viewers have connected and watched the sessions every night via live internet streaming, and more than 10 000 people from South Africa and other countries have connected with River Ministries via the church’s facebook page. The conference has also been viewed worldwide on satellite television broadcasts.

“Apostle Maldonado and his wife pastor Anna and his team have been instrumental in bringing the healing power of Jesus Christ to literally thousands of desperate people, who have been coming to the meetings or sending in their prayer requests, salvations and testimonies via email, sms, facebook and phone calls,” says the media release.

“Some of the miracles, physical healings and testimonies of what God has done in believers’ lives include a person’s leg that grew longer and a wheelchair-bound woman, who was for years dependant on an oxygen cylinder, who, after she received her miracle, was happily laughing and jumping around and pushing her own wheelchair!

“Others include instant weight loss and even legs growing. In the meetings people are testifying to eardrums opening, eye sight being restored, being healed from asthma (no longer needing to take medication), miraculously receiving money into bank accounts and people pushing their own wheelchairs and walking again! “ 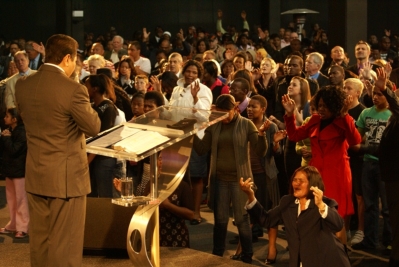