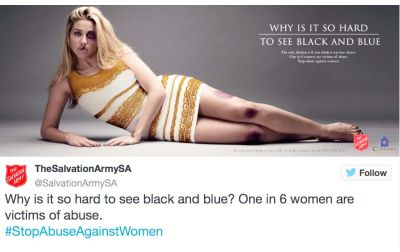 The Salvation Army’s South Africa branch has used the viral frenzy over the picture associated with the hashtag #thedress to spread awareness of violence against women on Twitter.

In a tweet, the Christian ministry featured a bruised woman wearing a white and gold dress, asking, “Why is it so hard to see black and blue?”

“The only illusion is if you think it was her choice,” the ad goes on to say. “One in 6 women are victims of abuse. Stop abuse against women.”

“They linked it to the work TSA [the Salvation Army] does with abused women and children and trafficked women,” Carin A. Holmes of the Salvation Army’s Southern Africa arm told The Washington Post. “We have two homes for abused women and children, Carehaven in Cape Town and Beth Shan in Johannesburg. TSA in South Africa brings awareness to this problem, which is huge.”

The ad has been designed by the Ireland/Davenport agency in Johannesburg, and it also appeared in the Cape Times Newspaper Friday.

“We wanted to take advantage of the hype of the meme to spread awareness for something important,” Ireland/Davenport creative director Wihan Meerhloz told ABC News. “Our creative team brainstormed ways to send a greater message about overlooked abuse against women using the dress.”

The Salvation Army USA is also highlighting the ad on its website.

More than two dozen people are victims of rape, physical violence or stalking by an intimate partner in the United States every minute, according to estimates by the National Domestic Violence Hotline. This rate amounts to more than 12 million women and men over the course of a year.

The original picture – a washed-out photo of a dress disputing whether the dress pictured was blue and black, or white and gold – became popular on the evening of Feb. 26. More than 10 million tweets mentioned the dress in the first week alone.