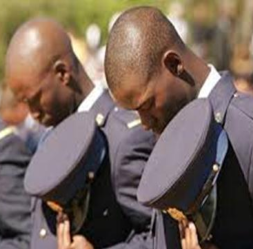 The South African Police Service (SAPS) will hold a National Prayer Day at the SAPS Tshwane Academy in Pretoria West from 10am to 1pm on Monday, September 29, 2014 as part of its observance of September as Police Safety Month.

The Police Safety Month which was declared to increase safety awareness and highlight attacks on police was launched on September 7 when hundreds of people gathered at the SAPS memorial site at the Union Buildings to pay tribute to 68 police officers who died between April 2013 and March 2014 while serving the people of South Africa.

Monday’s National Prayer Day will focus on, among other things, police officials, police safety, prayer for the reduction of crime in general, and prayer for the reduction of gender-based violence. The Visible Policing Division and the Spiritual Services Section will host the prayer event at which the dress code will be uniform or office wear, SAPS employees were informed in a memo this week.

“A collective prayer has the power to protect and save police officers and preserve the nation. Police officials are responsible for protecting the community and our prayers can help save our police officials from harm,” the memo concludes.