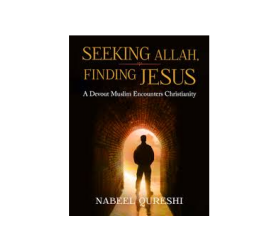 In this book, Nabeel Qureshi tells first of his Islamic heritage. He is the son of Pakistani born parents who came as adults to America. They passed on their great love and respect for the Muslim faith to their two children who were both born in the US. Nabeel was well skilled in arguing the case for his faith’s belief in Jesus as prophet and not the Son of God and could quote from the Bible in such discussions in defence of his position. As an enthusiastic ambassador for Islam, he could also argue the case for Jesus not having died on the cross, eloquently presenting the alternative theories held and taught by his beloved religion.

Nabeel tells also of the difficulties of being a first generation Westerner and the emotional pain in his adolescent years of always being the outsider as he tried to form friendships. Early in his student years however he met David, who quickly a became a close and trusted friend. The fact that David was a committed Christian was no barrier in this friendship; rather it was David”s passion for his beliefs and ability and willingness to engage in intelligent discussion that formed a strong basis for the friendship.

As a student, Nabeel was coming to an understanding of the difference between Eastern and Western ways of thinking regarding matters of faith, but was eager to show that the Muslim faith had an objective basis. He thus enthusiastically took on the various challenges to his faith that David and other Christians posed to him.

But as he researched these issues in his father’s library of Islamic literature, he was faced time and again with glaring contradictions between what is taught as major tenents of Islam and what was actually historical fact as recorded in books of Muslim tradition. In Nabeel’s own words ‘…it was the most trustworthy Islamic traditions that subverted my faith.’

Nabeel’s journey from his beloved Islamic faith to an understanding of the truth about Jesus and his death and resurrection took three years. To embrace the Christian faith was for him, as it is for most Muslims, an agonising decision emotionally because of the implications for his close-knit and devout family,

Although Nabeel was a medical student during his time of searching for the real God and holds an MD, he has left the field of medicine and is now in full time ministry in partnership with David.

Besides being an extremely interesting story of one man’s spiritual journey this book is also a good resource for an understanding of the Muslim faith. In addition to the text of the book itself, there are appendices in the form of URL links to further information written by popular experts.

David’s friendship with Nabeel which was a balance of unconditional love and appropriately timed challenges and confrontation is a wonderful example of friendship evangelism.

I can thoroughly recommend this book, particularly for those who have the opportunity to speak into the lives Muslims.