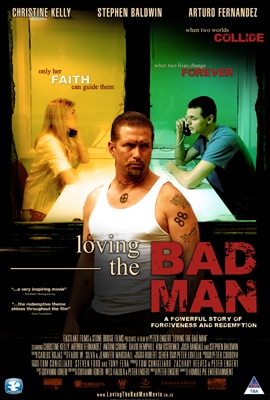 Humble Pie Entertainment is offering 50 free church  screening licenses until September 25  to churches who want to  “share the power of forgiveness” by showing Loving the Bad Man as part of an outreach, social event or teaching.

The movie, starring Steven Baldwin (The Usual Suspects), Christine Kelly (Salvation Boulevard), and Arturo Fernandez (Burn Notice), is about a Christian girl who actively seeks to forgive and minister to a violent man who raped her. According to Movieguide  it is “a very inspiring movie” which “squarely faces the issue of a rape” but “powerfully shows how God can heal lives and bring peace”. It was released in South Africa on August 3 at select independent cinemas.

Pieter Pohl, of Humble Pie, which is marketing the film in South Africa, says: “We have a vision to challenge Christians with the mandate Jesus gave to forgive one another, even to forgive our enemies.”

Churches wishing to take advantage of the free screening offer should contact Maryna at screenings@humblepie.tv  or  021  802 6793.

In its review Movieguide says “Loving the Bad Man goes to the extreme in dealing with God’s command to forgive. It’s not a movie for the faint of heart. Prison life is presented as extremely undesirable. Ironically, the few obscenities in the movie were not used by the inmates but by Julie’s father, who had a very low opinion of having the son of a rapist living in his house. The movie doesn’t present Julie or her family as flawless human beings. It squarely faces very human reactions to a rape, but shows how increased reliance on God can heal lives and bring peace to the traumatized. The filmmakers are to be commended for their efforts, but the movie is not one to show to young children. Its subject matter is more fitting for those in high school or a mature audience.

“The movie’s greatest strength is that it will bring viewers to tears as it shows how God can use people who are doing the right thing at the right time to touch the hearts of deeply hurting people.”