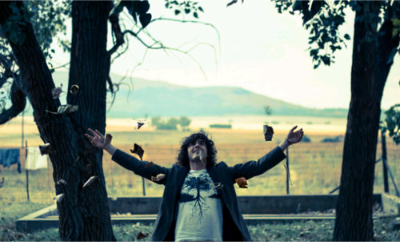 With emphatic style Joshua Na Die Reen hit the South African music scene in 2013, forcing people to sit up and take notice. Their own unique style of stadium rock infused with classical piano and string instruments along with the crystal clear vocals from front man Jacques DeVilliers, has enabled JNDR to perfect a sound that no other South African band has come close to.

Irrespective of the fact that their lyrical content is in Afrikaans, JNDR’s debut album is one that every South African family should own. Even though JNDR is not a gospel band their deeply profound lyrics and spellbinding melodies take you on a journey through your own soul, and allow you a brief glimpse into the heart of Jacques DeVilliers a lover of rain and a man that likes to stare at reality hoping for more than just the obvious. Jacques’ faith in Jesus Christ and his love for all things beautiful spill over into his lyrics and into your heart. The album speaks of faith, hope and love and inspires an introspective mood to find the beauty in our relationship with God and with the people close to our hearts. JNDR is actually Jacques’ solo project but he describes it as a beautiful coherence of people close to his heart. He began his career as singer Jakkie Louw’s pianist and background vocalist waiting patiently for an opportunity to start his own solo project.

A forest of lights

In early 2013 this dream became a reality. He completed the recording of his debut album at Sunset Studios in Stellenbosch. So JNDR’s debut self titled album was born. The first single off the album “Lig op die horison” was released with rave reviews. Jacques explains the inspiration behind the song; “My dad came to me in Oct 2012 after a performance and told me that he got this feeling that the time has come for me to record my first album. My excitement grew because this was what my heart was so patiently waiting and hoping for. In the following week I woke up with the chorus of the song in my head. I knew that this was the message that needed to reach people through my music. It eventually became the album’s theme. People seem to forget the hope that lies within us; it is time that we remember.”

If this album is a journey, where does it take us? “Over mountains and the ocean and through a forest filled with lights, back to a time where the child in you still believed in hope.” JNDR has been compared to One Republic and Coldplay but Jacques would prefer to remain in the uncategorised section. He hopes that his sound would one day become the music that people would want to compare their music with. He describes his personal favourite song on the album as a moving target. “All the songs are very personal; at the moment my favourite is ‘Dra die liggies’, it reminds me of the Black forest in Germany where I wrote the song. When I hear it now, I can see myself sitting on the wooden floor, breathing in the fresh air. I remember all the people that are like lights in the forest to me”.

The name Joshua Na Die Reen carries a profound meaning and points to the life and destruction that a rainstorm can bring. For some it can be negative and for others positive, though the fact remains that rain brings life even if the effect is not immediately visible. “I believe every situation can bring life or death, the decision lies in our hearts. After rain there is growth, I hope we can all make a decision that the difficult times in our lives can be, like rain, a time to grow.”

The message of hope in JNDR music is comprehensive and speaks of an unyielding, unconditional love. When quizzed if faith has always been a part of his life Jacque said, “Faith was not always part of the equation for me, but somewhere along the road eternity played in the fields of my heart. I cherish this Friendship and am thankful for it and for the road that I’ve travelled. I guess that is what life is all about; the roads we travel.”

The people that complete the band and the behind-the-scenes team can be described as an ensemble of friends and family dear to the singer’s heart. Jacques’ brother Pierre is his manager and very capable sound engineer. Pierre is also responsible for the running of the website as well as a lot of the small things we never get to see onstage. Jean, Jacques’ younger sibling is his drummer. Jean is also a singer and songwriter in his own right and just a great guy to be around.  “Lizandra Von Hagen sings with me but she actually deserves to be on centre stage, Phillip Fouche plays acoustic guitar and is way more talented than he gives himself credit for. Hein Berner is a lifelong friend and electric guitarist for the band. Our bass player is Gerhard Bienedel and even though he is a left brainer he still manages to cope with all the right brainers around him, at least we are more on time because of him. These people have become like my own flesh and blood and away from the stage we are just a group of people that enjoy each other’s company so much.

Success and the future

The cherry on top of a hugely successful debut year for JNDR was being awarded 2 Ghoemas for best newcomer and best male contemporary album at the Afrikaans awards showpiece in April this year. Jacques explains his amazement at the success he has enjoyed; “It was a huge surprise and I am so thankful, it is such a privilege just to be living my passion and then to top it all being spoiled with theses two awards too!” With a couple of nominations still coming his way the awards are sure to gather quite quickly for JNDR.

Even though music has always been his passion, Jacques states that he had some other aspirations too; “I’ve always wanted to make music but I wanted to be a nature conservationist too. Now, I get to sing about nature.” On future plans Jacques says, “I try not to think too much about the future, but I am excited about all the shows ahead and all the new people I will meet. I’m looking forward to see what this year will learn.”

From humble beginnings as a farm boy growing up in Walkerville in the south of Johannesburg to taking the South African music scene by storm one thing remains constant in this young performer’s life; a humble attitude with feet planted firmly on the ground.  He describes himself as having a soft spot in his heart for rain and is a person who easily draws people close to him. A man who likes to look at the world hoping for more than what he sees, I believe Berthold Auerbach had people like Jacques in mind when he said; “Music washes away from the soul the dust of everyday life”. Joshua Na Die Reen’s music comes highly recommended; it subtly forces you to look inside your own heart at the beauty that comes after the ashes have been washed away. It draws your attention to a hope that can so easily be drowned out by the noise that this world makes. You owe it to your soul to give his music a listen.