The number of police officials murdered in South Africa has declined by 61.9% since 1994 according to figures published by the South African Institute of Race Relations.

In 1994 there were 265 murders of police officers. The number of murders remained above 200 a year up until 1998. In 1999 the number fell to below 200 for the first time since 1994 when 187 officers were murdered. The numbers continued to fall through the early 2000s. In 2004 the number of officers murdered fell to under 100 for the first time since 1994. Subsequently the numbers increased slightly averaging between 100 and 110 in the period 2006 to 2010. However these later figures were still over 50% lower than was the case at the time of South Africa’s political transition.
The table below provides the figures for every year since 1994: 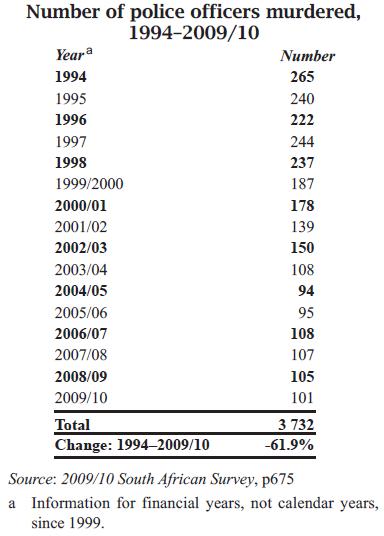 The trend in the number of police officials murdered in South Africa is definitely sharply downward. This is contrary to some sentiment expressed in the past week that South Africa’s police officers are being murdered at an ever greater rate. While every murder of a police officer is a tragedy it is necessary to point out that considerable progress has been made in reducing the
number of killings, says the SAIRR.