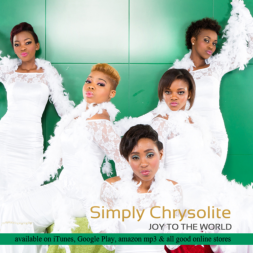 Multiple award winning girl band Simply Chrysolite have set the mood right for the Christmas season with the release of this carol “Joy To The World”, as well as the acapella version now available on itunes, googleplay, amazon mp3, spinlet and other digital stores.

Named after one of the precious stones in the foundation of the heavenly Jerusalem as written in Revelation 21:20 – the 7th foundation out of 12, ‘Simply Chrysolite‘ is made up of five young ladies from KwaZulu-Natal in South Africa; Thab’zo Mkhwanazi (25), Phumzile Ngcobo (27), Dolce Bophela (28), Thabiso Mkhize (28) and Pretty Nguse (23).

Totally different from the thousands of ‘Joy to the world’ versions out there in the market, this funky, afro-rhythm and blues styled tune would get you up on your feet, before God’s throne room of praise and actually leave you there – body and soul.

Simply Chrysolite was formed by Omotoso in 2009, and have since grown to become one of Africa’s most popular gospel bands. Grammy-winning gospel musician Kirk Franklin has described them as “fresh, dope and crazy” and said that he was “totally amazed by their voices and harmony”.