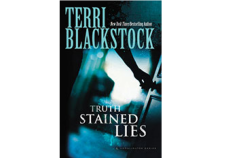 Prolific Christian writer Terri Blackstock’s Truth Stained Lies is a satisfying page-turner that will be enjoyed by a broad cross-section of readers.

The story kicks off as former lawyer and investigative murder trial blogger Cathy Cramer receives a menacing email. She is inclined to dismiss it despite the concern of family and friends. But when her brother, Jay, is arrested on suspicion of murdering his wife, she takes the threat more seriously. Cathy and her responsible older sister, Juliet and irresponsible younger sister, Holly, team up with Michael Hogan, the ex-cop brother of Cathy’s murdered fiancé, to conduct a real-life murder investigation. Jay’s freedom and the well-being of his 5-year-old son depend on their detective skills as the media and police consider that there is an open-and-shut case against the man behind bars.

The drama and intrigue around the investigation is engrossing. And from a Christian perspective the story is all the more interesting as the siblings wrestle with their faith and theology which is affected by shattering events from their past and their present, deepening crisis.