About 3 000 Christians from diverse denominations and many different regions of South Africa joined a significant number of local and international Church leaders in Soweto on Saturday June 11 to participate in the South African Council of Church’s (SACC) ‘Singing a New Song’ campaign that followed the 1976 students’ march route to Orlando Stadium for a service of reconciliation.

“Following the route in the steps of the 1976 students was one of the highpoints of the day, although it was very emotional for me to be there,” says Anneke Rabe who travelled from Mkhondo in Mpumalanga to attend the event.

“While we were waiting for the march to begin it suddenly hit me, when some of the school children started singing, what the mothers must have felt when they sent their children to school and some never returned having been killed.

“I pictured my own children in that march. It was like the Holy Spirit was crying through me and feeling what those mothers must have felt.”

Rabe says another golden moment before the march started was when a man, by the name of Gabu Tugwana who was a journalist at the time of the uprising, told her how he had spent 30 months in solitary confinement.

“He was such a humble man and I could see Jesus shining through him. I started apologising for the pain of apartheid, but he looked at me with such peace and said” ‘You don’t need to say sorry, in that cell I met my Saviour, which changed my whole life and I have forgiven a long time ago’.

“He was just reflecting the peace and the love and the forgiveness of Jesus.

“Another person also commented on how it was time for South Africans to take hands in reconciliation and move forward together so that we can be a reflection of what Jesus wanted when He said we must truly love one another and that love covers a multitude of sins,” says Rabe.

“It was wonderful getting to know people on the march from all over the country.

There was such a sense of love and unity walking as people of high rank walked side by side with common men, women and children.

“Marching together emphasised that in Christ we are all the same and it was uplifting to see members of so many different denominations walking together.

“There were a lot of smiles and love was expressed as we walked past people. I never felt condemned and there were beautiful songs sung as we walked,” says Rabe.

Reverend Moss Ntlha, General Secretary of the Evangelical Alliance of South Africa says what touched him was the parents walking on the march who were walking in the footsteps of their children 40 years ago.

“When the young people marched 40 years ago they never completed the march, because of being stopped by the police and the resulting bloodshed. 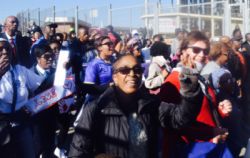 “We have to complete their struggle to ensure that all children receive a good education and that none are prejudiced, because of the colour of their skin, which is a statement that the march was making.

“No-one among the marches thought it was a once-off thing. There was a commitment to continue working on rebuilding on the ruins of the past as some of the schools from where students marched in 1976 are worse-off than they were 40 years ago.

“The education outcomes are worse-off and their infrastructure is worse-off, so the June 16 Foundation representing students who marched in 1976 are determined to improve conditions at the schools and they have been joined by the veteran members of the South African Defence Force Association (SADFA), many of whom were conscripts at that time of the student uprising.

“This is a journey of rebuilding that goes beyond June 16 to an ongoing story of reconciliation among South Africans,” says Ntlha.

Pieter Bezuidenhout, a Pastor in the South African National Defence Force, agrees that the march from the Madibane High School to Orlando Stadium was meaningful and brought a sense of healing.

He says there were also very good interactions between members of the SADFA and family members who lost children in 1976, which brought a great relief and a sense of closure.

“There were not only South African Church leaders, but leaders from 10 countries and from the World Council of Churches,” says Rabe.

Ntlha agrees that the gathering was a significant moment in the journey of the Churches together based on the Biblical imperative for reconciliation.

“It was important that Church leaders were there together in their leadership capacity supporting a very timely issue for us as a Church and nation, because the issue of race and reconciliation has come to the fore in the last few months.”

Ntlha believes we require leadership in prayer and in understanding more clearly what is wrong with our society.

“Prayer helps us to transcend what we see before us by helping us see what the potential of this nation is if we unite and to lay hold of that.

“For example, I was really blown away by the depths of the prayer, confessions and people taking personal ownership of the sins of the nation at the gathering, which I think is a spiritual development in terms of both sides of the divide seeing the need for the other, the need for holding hands, and the need for humility.”

Rabe reports that two groups of intercessors who were at the meeting not only prayed throughout the programme, but participated in actions of reconciliation like washing one another’s feet, the symbolic laying down of the sword and taking up of the plough to build South Africa.

He, like Ntlha, was particularly struck by some of the confessions at the event, by both black and white participants who acknowledged and confessed the injustices and offences committed during apartheid.

“The unity and the mingling of people present was also significant and strengthened bonds between Christians, particularly at a leadership level for the aim of reconciliation in our land.

“However, we understand that one event will not change the population’s hearts or bring about reconciliation, it is a process that largely depends on what Churches at a local level are going to do to enhance reconciliation in their communities.

“We need to start interacting across the divisions caused by race, tribe, status, education, and wealth, and build trust by working together to overcome our challenges as a society.

“For example, in the military we started with integration in 1995 and we have gone through a process of listening to each other’s stories to help us change our minds about each other and that has helped, but most South Africans have not gone through such a process and retain simplistic perceptions that are false and have never been challenged, such as all whites are racist, or all blacks are terrorists, which is just not true.

“As an alternative, if I call someone a believer, not black or white, we share Christ and that gives us a foundation from which we can interact, we may differ in many respects, but there is a commonality, we share the blood of Christ, we have been redeemed and we want to forgive and participate in building our communities and country.

“We all have a dream, we want to live, we want a roof over our heads, we want to eat, we have children who we want to have jobs – most South Africans share those desires and if we can help each other to attain them we will all be better off.

Still a lot of fear
“However, there is still a lot of fear. Jesus Culture sing that song, ‘I’m no longer a slave of fear, I’m a child of God’ – without denying the challenges, I can’t live from fear; he’s my brother, she’s my sister, I must love them and get to know them better, they have dignity and value, because they are people created in the image of God.

“Instead, our minds are cluttered with the murders and violence that are highlighted in the media,” says Bezuidenhout.

“However, as Christians we can only hold up the ideal that the way of Jesus and the cross is a narrow road on which we are all called to abandon our traditional weapons of racial prejudice and walk with Him in the journey of reconciliation.

“As Jesus said ‘Blessed are the peacemakers, for they shall be called sons of God’ (Matt 5:9).

“We need to distinguish ourselves in a world that identifies itself as not accountable to God, but self,” says Ntlha.

“We need to work together and pray together believing that God created us for His pleasure and purpose (Ephesians 1).

“We are not in this country by coincidence, but have a purpose for which God created each one of us and placed us here.” Romans 8:28 And we know that all things work together for good to those who love God, to those who are the called according to His purpose.

“If I understand that I have a purpose my whole attitude changes, my words, my beliefs, the way I live and interact will change, because it is not about me it is about God and what He wants to do through me,” says Bezuidenhout.

He believes the three strongholds that need to be overcome in order for reconciliation to take place in the country are: a lack of trust and wrong perception about each other; violence used as a method to try and resolve issues; and the disruption of our education system.

Ntlha says the structural and legislative aspect of dismantling apartheid was the easy part.

“Now, we have human hearts that still need to be changed, which is where the Church’s ministry is so important and is what the testimony of the march was about.”

Rabe is convinced that God worked at the event on different levels, not just reconciliation between the different races, but also on a personal level.

She says He touched people very deeply and she left the gathering feeling that we have arrived at a place where we haven’t been before, trusting the Lord to show us the way forward.

“The Lord says where His Church comes together in unity there He commands a blessing.

“I see unity developing through reconciliation and the blessing God will command is the poor getting jobs and the big gap between rich and poor being addressed in our country so that we can physically see the fruit of unity,” says Rabe.