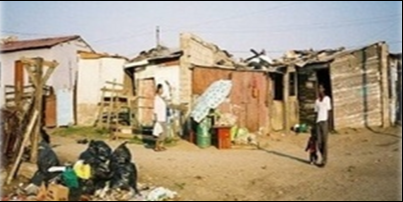 Church leaders and intercessors in East London and as far afield as Nigeria are joining hands in a concerted spiritual battle to transform a township that is ravaged by poverty, drunkenness, violent crime, drug abuse and rape.

The project team are half-way through 60 days of prayer and fasting for Duncan Village, an East London township that keeps on getting worse despite major development initiatives since 1994 and which has defied outreach campaigns by many men and women of God —  earning it a reputation as a “preacher’s graveyard”.

The vision for Christians to unite in tackling the transformation of the township was sparked by a word from the Lord –” Make Duncan Village a project” — received at a conference in East London in 2010 at which local Christian leaders met to seek the Lord on behalf of the prophetic destiny of the city, says a project spokesperson, Laurette Mkati.

In the first phase of the Duncan Village Community Transformation project the team focused on creating awareness of the vision, mobilising partners, training people in spiritual warfare and spiritual mapping — a process of gathering strategic spiritual information about the area. Information that was noted included the mob murder and eating of an Irish missionary doctor in 1952; a revival in 1955 under the ministry of evangelist Nicholas Bhengu, during which time truckloads of stolen goods and stolen cars were taken to the police station after services; political violence during the struggle against apartheid with people killed by the regime and by “necklacing” by members of the community. Ongoing issues include violence, lawlessness, witchcraft and muti murders, deceptive cult churches, continual shack fires and vandalising of new houses before they are occupied because of disagreements about who should get them.

“Although there are many churches (in Duncan Village) there was no unity amongst the pastors until we began the project.  It has taken more than a year to unite the group of pastors who are now committed to the project,” says Mkati.

She says that Duncan Village churches, with help from churches in East London and further afield, were ensuring that the project was covered by continuous prayer and fasting throughout the 60-day period. And at a recent Pastors/Ministers Prayer Network Congress in Lagos many pastors from Nigeria and other nations have agreed to take up the burden as well.

“People are being revived in their own prayer lives due to this commitment.  Prayers are being answered in many ways.  For example, fathers who have long neglected their children have begun to make contact and seek forgiveness,” says Mkati.

Breakthroughs
In other breakthroughs since the prayer started the group has been given a base office in Duncan Village and they have heard that the Eastern Cape Government is planning to launch a facelift programme in the township.

In September the group plans to conduct a major outreach programme including door-to-door visits and crusade meetings aimed at winning souls to Jesus, ongoing discipleship of new Christians, and assisting needy people with personal needs such as food and clothing.

“As Government may work on infrastructure we want to work on the lives of people, bringing healing, reconciliation amongst broken families, deliverance from alcohol and drug abuse, and restoring their souls,” says Mkati.

“We are believing God for community deliverance from wickedness and a strategy to rebuild not only the spiritual but physical lives of the community, especially the youth.”

She says the group has identified a spot on a small hill where they want to erect a luminous cross as a sign of the redemptive work of Christ.