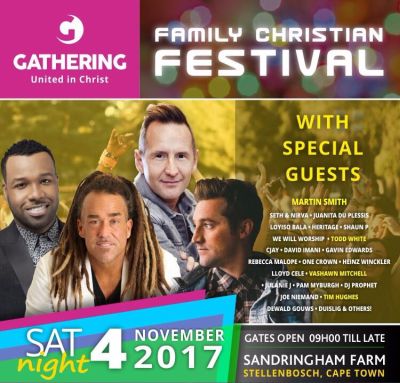 For two days in early November there is going to be a gathering of note in Stellenbosch with a remarkable lineup of quality international and South Africa Christian music artists and charismatic US-based evangelist Todd White.

The event is called the Gathering — because that’s the name that God gave it eight years ago when he planted the vision in the heart of Julita Kok on a life-changing day in which He called her out of a place of hopelessness and launched her into her calling of managing musicians and organising events.

“So, for the past eight years I’ve been waiting on Him to tell me when the event is going to be and then in 2016 I woke up one morning and He said: ‘Okay, it’s time’ and I started preparing for 2017,” said the founder of Nuelight, a leading prodcution and artist management company.

With its music, ministry, expo and children’s programme the Gathering family Christian festival has plenty of crowd appeal and all indications are that those who get to be part of the event at Sandringham Farm, Stellenbosch on November 4 and 5, will be blessed. But actually, the Gathering is for God Himself, said Kok.

Kok said some people had questioned the time of the event. But there have been enough signs that it’s in God’s perfect timing. For instance she connected with the Western Cape organisers of the current 40 Days of Worship initiative — and discovered that the 40 days ends on November 3, the day before the Gathering begins.

And then there is the presence of Todd White — whose ministry is in demand all over the world and who is known to be hard to book. White had planned to visit South Africa in 2018 but God told him he should visit in 2017 and that he should not go to Johannesburg as he usually did, but to Cape Town. He was advised to speak to Kok about setting up a Power and Love conference in Cape Town. The only days he had available were November 1 to 4 — Power and Love is running from November 1 to 3, and White will be at the Gathering on November 4.

The diverse artist mix at the Gathering includes many well-known names like singer, guitartist, producer, songwriter Martin Smith (former frontman for UK Christian rock band Delirious and behind popular worship songs like  Can you feel the mountains tremble?  and I could sing of Your love forever), Tim Hughes (leader of Worship Central and co-writer of Here I am to Worship ), Loyiso Bala, Rebecca Malope, Juanita du Plessis…to name a few.

And then there are others who Kok selected in line with he brief from God to include every genre of music and artistes of every race, and her desire to showcase some hot new blood and display South African talent to the international musicians.

Seth and Nirva, a married couple, who have respectively worked with Kirk Franklin and Tobymac, and now have their own album “are phenomenal and so anointed — and South Africa does not know them,” she said.

Then there is Heritage from Canada, who rework beautiful old hymns and make them new, motown artist Vashawn Mitchell — writer of Nobody Greater, which held the number-one position on the American Billboard’s Hot Gospel Songs chart for nine weeks, Eclectiv — a collective jazz band from Belgium…and much more international and South African talent. Kok enthuses about each and every one of the artists (See programme).

Having organised a number of big music events such as Imagine Cape, Christmas with God TV and Blue Rock Gospel Fest, she said the Gathering was unlike them all because there were no sponsors or budger for it, and every step had to be taken by faith.

God was making a way and she had heard of people coming to attend from Scotland, Belgium, England, Sweden, America and some African countries.

“I would like the people who are there to really receive something from God. So I am really hoping that people will come. And it is all in God’s hands,” she said.