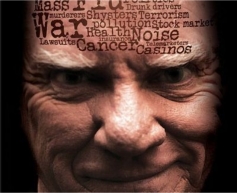 It seems the notion of taking Satan to court is resonating with Christians across the country—and is even turning atheists and gangsters to Christ. Suing the Devil, a film that opened in select theaters on Aug. 26, had the second-highest grossing average of any independent film in the nation.

Here’s the premise of the film: Luke O’Brien (Bronsen), a washed-up janitor turned night law student, decides to sue Satan (McDowell) for $8 trillion dollars. On the last day before Luke ﬁles a default judgment, Satan appears to defend himself. On Satan’s legal team are 10 of the country’s best trial lawyers (Dennis Cole, Jeff Gannon, Annie Lee). The entire world watches Legal TV (Bernsen, Sizemore, St. James) to see who will win the “Trial of the Century”

Written and directed by Harvard alumnus Tim Chey, the film is making an emotional impact on viewers. Some are even comparing it The Passion of the Christ.

“So many people are telling us how the film opened their eyes to the devil’s tactics,” says Chey. “We had one story where a couple had a troubled marriage for 17 years. The morning after they saw the film, they restored their marriage and opened their house up for worship. Another was an atheist, who came to the front of the theater and got on his knees after another screening. And yet another was a gang member who accepted Christ because of the movie. Incredible.”