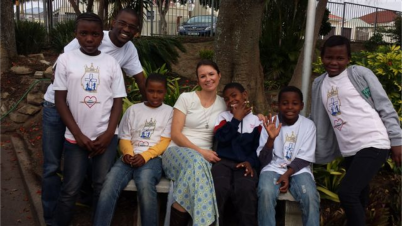 These children from New Hope Centre in Swaziland have spent the past week ministering in schools in and around East London as well at a retirement complex where they shared their messages of hope through their lifetestimonies, song and drama. The children were all orphaned as a result of losing parents to HIV/Aids. They were accompanied by fourth generation missionary to Swaziland, Miss Tracie Hynd (centre) and Caleb (back,left), a young man of 22 who arrived at New Hope when he was 11. The former street child had never been to school but completed his schooling there and has now been accepted to attend the University of Pretoria where he plans to study social work next year,
finances permitting. (PHOTO: Gaye Moonieya)