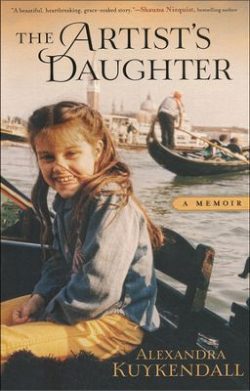 THE ARTIST’S DAUGHTER by ALEXANDRA KUYKENDALL

This memoir starts with the author’s first meeting with her elderly artist father at the age of eight in Barcelona. Alexandra had high expectations of this meeting and the father-daughter relationship that she assumed would result. Her disappointment in this area was to affect her life for many decades.

Alexander writes openly and charmingly as she tells of her life with her American mother, then later of her student years, marriage and early motherhood. Throughout all these phases of her life she continued to experience the pain of an absent father – with this distance being both in miles and emotional connection.

As an adolescent, she opened her heart to Jesus after a period of struggle and questioning. This was to be the beginning of her journey to emotional wholeness as she discovered over the many years a Father whose love and care for her surpassed that of any earthly father.

She talks with great frankness of her insecurities and tireless pursuit of perfection and her difficult first years of marriage with her husband who, although a loving and caring man could understandably not fulfill all her emotional needs. Her first steps into motherhood were also fraught with emotional turmoil and self doubt. Establishing close relationships with other young Christian mothers and learning to be open and vulnerable led to a great deal of progress towards the inner peace she had sought and longed for for so long.

Alexander is now the mother of four daughters and is on staff at MOPS International (Mothers of Preschoolers). Her honesty as she grapples with issues of motherhood, such as how to pass on faith in God to one’s children when there seem to be so many unanswered questions in life’s journey, will resonate with mothers of all ages.

I certainly enjoyed this book and will be encouraging my daughter (a young mother) to read it.