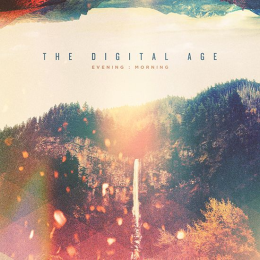 This week I will start with a quote from my 16 year old hero, my son!  “This doesn’t sound like ordinary Christian music mom, these guys are great!”  This made me sit up straight and listen from a different place…

Our focus this week is on THE DIGITAL AGE and their brand new album EVENING:MORNING.  They have the proverbial ‘something old, something new and lots of fun’ feel to them and to my great surprise I actually new them, just with a different hat on!

Here we have four guys who have done life together; all of them started their studying years at the Baylor University in the town of Waco in Texas, at the age of 18.  These four guys, Mike D, Mark, Jack and Bwack joined forces with some other talented musicians and formed the well known group The David Crowder Band.  Like all good things this season too came to an end and six months after the last release from the David Crowder Band, THE DIGITAL AGE was born.  This dream has however been brewing on the back burner since 1995…

They wanted to keep the good stuff of the past but also morph into what God was saying to them as a team.  I absolutely LOVED the way they combined their own material with other musician’s offerings, like Break Every Chain by William Andrew Reagan.  They also used one of the songs from that fantastic group we reviewed a few weeks ago, All Sons and Daughters called ALL THE POOR AND POWERLESS.  Just for good measure they added Believe by Jack Parker & Jeremy Bush.

Oh do go and find the official video clip of “Captured” on YouTube, it’s something to see.

Until next time, let the worshipper in you arise!