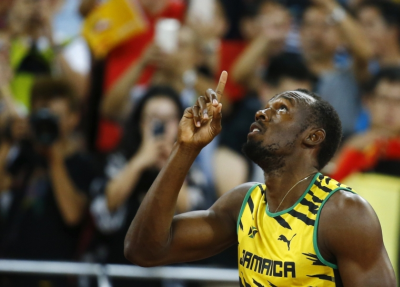 He is the world’s fastest man. He holds the world record for both the 100m and the 200m sprint and later today Usain Bolt will line up against former drug cheat, Justin Gatlin, for the second time in a week.

Bolt is also a professing Christian. His PR team have confirmed Bolt is a Bible-believing, God-honouring, Jesus-worshipping Christian. But other than crossing himself and offering silent prayers at the start of each race, he is relatively reserved about his faith.

However, the occasional tweet reveals a faith that is centred around praise and gratitude. Here are five moments that give us an insight into Bolt’s Christian faith:

Bolt gives glory to God
When Bolt beat his team-mate Yohan Blake in the Olympic 200m final in London 2012, he made history by becoming the first man ever to defend the 200m Olympic title.

After the race, Bolt tweeted to gratitude to the Lord: 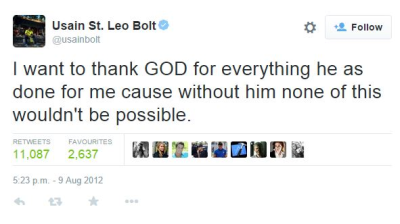 Last weekend Bolt beat Justin Gatlin, a former doper, in the 100m World Championships. It was the first time Bolt had returned to the ‘Bird’s Nest’ stadium in Beijing where he first became Olympic champion, breaking the 200m world record in 2008.

After beating Gatlin on Sunday, Bolt again tweeted his thanks: 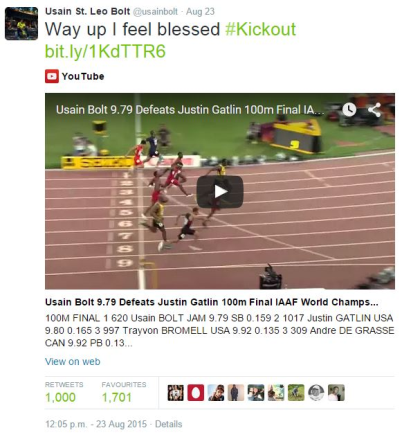 Bolt at Easter:
In among tweets about his race results, training schedule and the latest Puma kit, Bolt also uses Twitter to encourage his 3.7m followers to faith. Here is a tweet from Easter 2015:

Bolt on scripture:
When Bolt burst on to the athletics scene, he was loved for his natural talent, his relaxed attitude and his humour.

However it seems he is not immune to difficulty as he tweeted a verse from Psalm 23 in the build up to the 2015 World Championships: 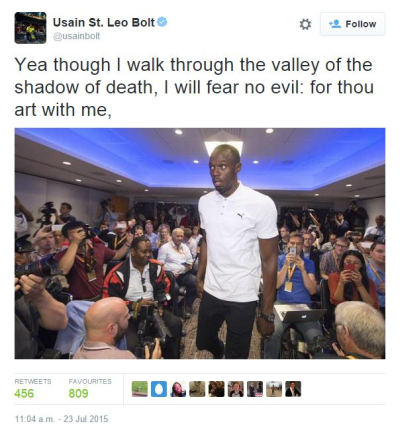 Bolt’s gratitude:
After growing up in a small village in Jamaica with no running water or street lights, Bolt is thankful for the small things and the big things. He encourages his followers to do the same: 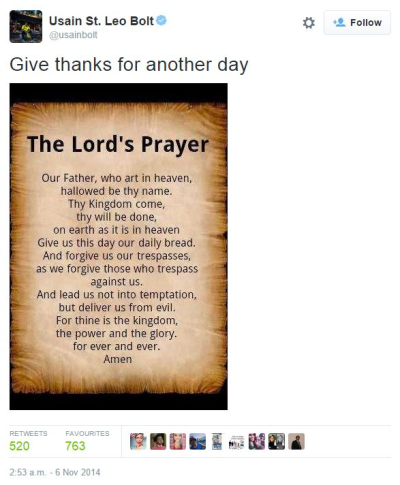